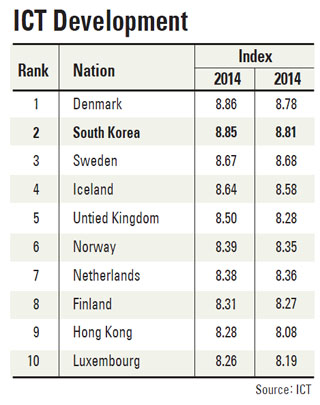 Korea gave up its No. 1 spot in information and communications technologies (ICT) development for the first time since 2010 and fell to second place, the International Telecommunications Union (ITU) based in Geneva said on Monday, local time.

According to the UN agency’s annual “Measuring the Information Society” report on global ICT development, Denmark ranked first on the ICT Development Index, which ranks 166 countries according to their level of ICT access, use and skills.

In the breakdown of the index, Korea came in second for its ICT skills, third in ICT use and eighth in ICT access, with an overall score of 8.85, up 0.04 from a year ago.

By sector, Korea came in first for the percentage of households with Internet access and second for the number of people who have access to the Internet outside their home. It had the sixth-most wired broadband Internet subscriptions per 100 inhabitants.

Korea was ranked second when the ITU released its first index in 2009, then stayed at No. 1 for the next four years.

The Ministry of Science, ICT and Future Planning said that Denmark surpassed Korea on the index because its wired broadband Internet subscriptions per 100 inhabitants increased from 97.4 to 107.5 and its international Internet bandwidth, the capacity for connections between countries, marked 261,221 megabits per second, about nine times higher than Korea’s at 30,306 megabits per second.

Sweden came in third, followed by Iceland, Britain, Norway and the Netherlands.

The report identifies a group of the “most dynamic countries,” which recorded above-average improvements in their index rank over the past year. These included the United Arab Emirates, Fiji, Cape Verde, Thailand, Oman, Qatar, Belarus, Bosnia and Herzegovina and Georgia.

On average, index scores are twice as high in developed countries when compared with developing countries, according to the ITU.