Tenants turn away from typical apartments

Tenants turn away from typical apartments 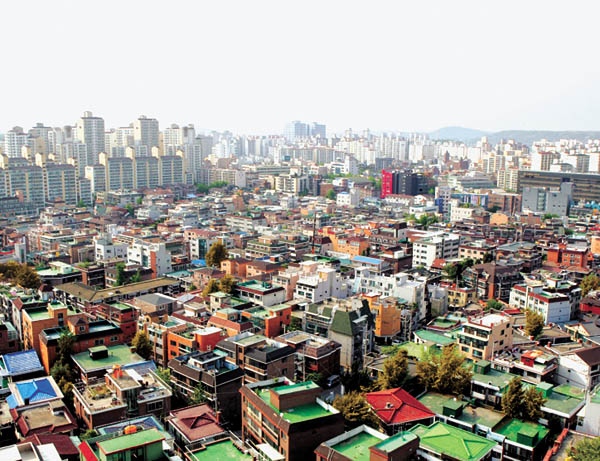 The multiunit townhouse neighborhood in Yangcheon District, southwestern Seoul, is gaining popularity among jeonse, or lump-sum deposit contract, seekers as the basic infrastructure is well established as well as the roads. Provided by the Yangcheon District Office


Mrs. Shim, a 34-year-old working mother, recently moved into a townhouse split into several units in Daechi-dong, Gangnam District, one of Seoul’s most expensive areas.

She signed for a unit on a two-year rental contract, or jeonse, for 250 million won ($224,132) - 100 million won lower than her old apartment in Bundang, Gyeonggi, even though it is located in a highly sought-after area.

“Due to the surge in apartment prices in Seoul I moved to Bundang but have returned to the city after six years,” Shim said. “Even though it is not a [conventional] apartment, transportation and other living conditions are quite good.”

As jeonse contracts are in short supply and because their prices are expected to continue to surge next year, consumers are looking for alternatives to the usual high-rise apartments that tend to be popular in Seoul.

According to Joins Land, the JoongAng Ilbo’s real-estate information provider, the number of newly built apartments ready to accommodate people from next month is about 17,700 across the nation - 45 percent less than last December.

And as low-interest rates continue, more homeowners are likely to switch from offering jeonse, which requires a lump-sum deposit that the owner invests during the contract period and returns to the tenant when the residency period ends, to monthly rentals. Because this will further aggravate the current short supply of jeonse housing, market analysts are advising consumers to be open to other options.

There are a number of desirable neighborhoods with units in three- or four-floor residential buildings in planned neighborhoods, analysts say.

Communities of this type can be found in Seocho, Gangnam and Songpa districts, the three most affluent areas in Seoul.

Mok-dong, Yangcheon District, Baekhyeon-dong in Bundang, Baekseok-dong in Ilsan, Unjung-dong in Pangyo, are seen as pleasant areas to live, too, and are also filled with townhouses.

Neighborhoods of this type in Gangnam and Yangcheon districts were developed to accommodate the growing population around 10 years ago or more and, as a result, tend to be clustered near public transportation such as the subway and have high-quality sewage systems.

Daechi 4-dong is well known as a neighborhood with economical townhouses, even though it is part of an expensive area. It is near Seonreung Station (line no. 2) and Hanti Station (Bundang line).

A three-room townhouse unit of approximately 60 square meters is priced between 250 million won and 350 million won in this area. In Mok 2-dong, a unit can be rented for around 200 million won.

In comparison, a 59-square-meter apartment in nearby Dogok-dong is priced between 500 million won and 600 million won.

The supply of townhouses is currently sufficient, and initial deposits can be lowered further if tenants can afford to pay monthly rent.

“Jeonse prices of such townhouses have shot up remarkably by around 50 million won, too,” said a realtor in Mok-dong. “Those who are looking for much lower deposits should consider paying monthly.”

Because townhouses vary in terms of size, design and interior, it could take some time and effort to hunt for a place that fits a person’s needs, unlike with apartments in complexes, which tend to be very uniform in layout and style.

“They need to inquire with real-estate agencies at least three months ahead of their moving in time,” the realtor said.

Signing a rental contract for a unit in a townhouse is almost the same as clinching a deal for a conventional apartment.

But one thing to consider is that these buildings are usually owned by a single person, so the tenant in each household cannot register the unit as their home.

On paper, a four-story building is considered a household, even though there could be at least two different families living on each floor. This may cause legal issues for occupants if landlords decide not to return their deposits.

“There are frequent incidents involving contracts on such independent residential buildings,” said Choi Gwang-seok, a lawyer in Seoul. “On paper, the unit number and floor number should be accurately written in order to protect deposits later.”