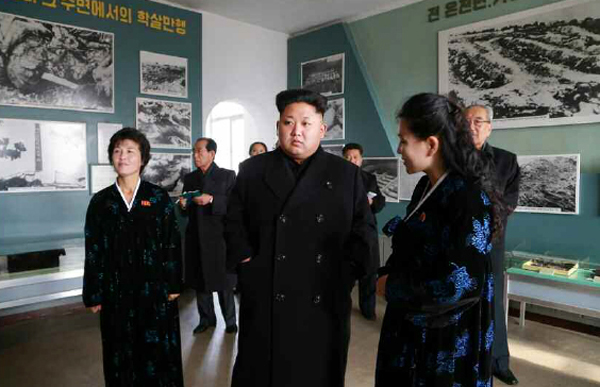 In an apparent move to counter international pressures over its human rights abuses, North Korea vowed to step up its domestic anti-United States propaganda.

“I am visiting this museum in order to strengthen the anti-U.S. lessons for our military and people in reflection of the changes in situation and demands of the revolutionary development and to powerfully unite the 10 million soldiers and people in the battle against the United States,” Kim was quoted as saying in the report.

According to the report, Kim claimed that American soldiers killed one fourth of the Sinchon County population, or 35,000 residents, during their less than two months of occupation of the region during the Korean War. Calling the U.S. forces “devilish murderers who attacked the country since more than a century ago,” Kim warned the people that “having an illusion about the enemy means death.”

The museum, located in Sinchon County of South Hwanghae Province, was built at the order of the late founder of the North, Kim Il Sung. It opened on June 25, 1960 and features photographs, paintings and artifacts from the Sinchon Massacre, as well as a grave site.

The massacre was a mass murder of Sinchon villagers between Oct. 17 and Dec. 7, 1950 during the Korean War. While North Korea claims that the 35,000 villagers were killed by the American soldiers during a U.S. occupation of the town at the outbreak of war, debate still continues on what actually happened during the 52-day period.

A 2002 report by the Munhwa Broadcasting Corporation concluded that clashes between Communists and anti-Communist vigilantes were responsible for the mass slaughter of the villagers.

According to the North’s report on Tuesday, Kim said the museum is evidence that the Americans are “murders and cannibals who take joy from human slaughters.”

He also said reinforcing anti-American education is a “matter of grave importance that will decide the destiny of the fatherland,” and ordered the museum to be remodeled.

Kim’s younger sister Kim Yo-jong and other high-ranking officials including Kim Ki-nam, a secretary of the Workers’ Party in charge of South Korea affairs, accompanied the leader to the museum, the North reported.

According to the report, Kim visited the museum with his father, the late Kim Jong-il, in 1998.

Earlier this month, a key committee of the United Nations General Assembly approved a resolution that urged the UN Security Council to refer Pyongyang’s leaders to the International Criminal Court for crimes against humanity.

A General Assembly vote is scheduled for next month and the resolution is likely to be adopted. But international prosecution of North Korean leaders including Kim is unlikely because China and Russia, members of the Security Council, have already expressed their objections and are likely to veto any motion.