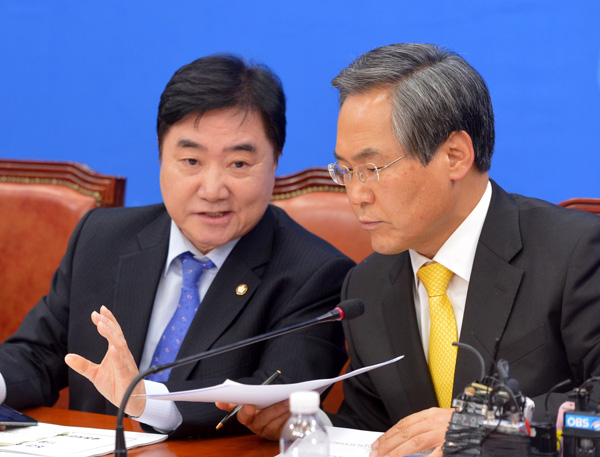 The New Politics Alliance for Democracy (NPAD) has attacked the prosecution for being overtly pro-government when it comes to investigating opposition lawmakers, and said it will no longer tolerate such suppression of the opposition.

There are 34 NPAD lawmakers who are currently under investigation, under trial or being closely monitored by the prosecution, which is more than one fourth of the lawmakers of the main opposition party, said Kim Sung-soo, a spokesman for the NPAD, in a briefing on Tuesday at the National Assembly. “That is unprecedented,” he said.

“The prosecution is targeting legitimate political funds that NPAD lawmakers have received,” he said, “but at the same time it has failed to come up with proof [of wrongdoing] in the method the lawmakers used to collect the funds.”

Some 34 NPAD lawmakers are suspected of employing a loophole and raising hundreds of millions of won from hundreds of people who remained anonymous because they donated 100,000 won ($90) or less. There are 28 NPAD lawmakers who have been probed or indicted for such political fundraising. Only five lawmakers from the ruling Saenuri Party have been investigated.

The prosecution suspects the donations are bribes made in exchange for legislation, which lawmakers deny.

In 2004, the political fund raising law was revised to ban any donation from private enterprises or groups. Individuals who donate 3 million won or more to politicians are required to disclose their personal details. But donors of 100,000 won or less can remain anonymous and also get tax deductions.

To circumvent the law, some groups have individual members make donations of under 100,000 won each.

“Prosecutors are turning a blind eye to the practices of ruling Saenuri lawmakers, including one who has received a hefty contribution from a two-year-old or another who received a lump sum of 100 million won,” Kim continued. “[The prosecution] has the political intention to lay a trap for opposition politicians.”

On Monday, Woo Yoon-keun, floor leader of the NPAD, claimed the prosecutors’ oppression of the opposition was turning into a kind of reign of terror.

The Saenuri Party, on the other hand, recommended the public to wait for the prosecution to wrap up its investigations.