Reps come to consensus over budget for day care

Reps come to consensus over budget for day care 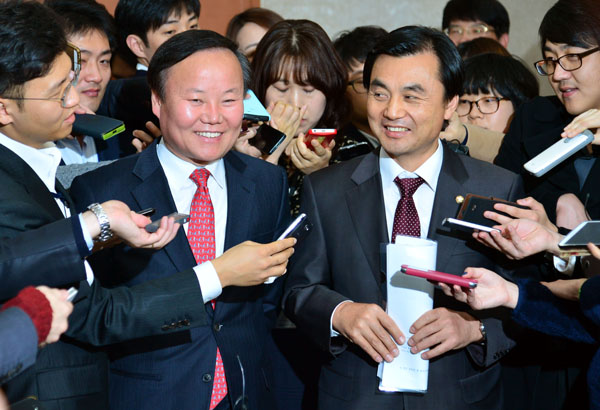 Lawmakers have resolved a key impediment to passing the budget bill for 2015, reaching a breakthrough deal on Tuesday by agreeing that local authorities rather than the central government should finance free day care for young children.

But the measure has the potential to ignite further controversy, including criticism that the central government is trying to pass the buck to local governments for the Nuri day care program, the educational welfare project that aims to improve the overall development of children ages 3 to 5.

And another point of contention is that the ruling and opposition parties have yet to narrow the gap on the size of the Nuri budget.

Under the agreement clinched Tuesday, funding for the plan will come out of local schooling grants given to city and provincial education governments.

The shortfall will be sourced from issuing local bonds. The central government said it will pay the interest on the bonds and that it will raise the annual budget earmarked for the Ministry of Education.

But the main opposition New Politics Alliance for Democracy (NPAD) is also requesting that the central government provide 523.3 billion won ($472 million) from the public purse to fund scholarships for students at vocational high schools and after-school programs for elementary-age pupils from lower-income families.

Countering the demands, the ruling Saenuri Party said that municipal education governments should discuss the size of next year’s Nuri budget with the Ministry of Strategy and Finance. It proposed that a smaller amount - 200 billion won - be used for the causes.

“We reached an agreement in a large framework, but minute points will be negotiated at the standing-committee level,” said Ahn Gyu-baek, deputy floor leader of the NPAD, after the deal was clinched.

Kim Jae-won, deputy floor leader of the Saenuri, told reporters that the two parties are debating over whether 200 billion won or 500 billion won in tax money should be allotted for next year’s education bill.

“We will do best to respect the stance of the main opposition,” he said.

NPAD lawmakers have recently critiqued the President Park Geun-hye administration, which they say has increasingly been passing its financial responsibilities to local governments, particularly in terms of welfare and education.

With just five days left before the deadline for completing next year’s budget review, the deal on Tuesday normalized the National Assembly’s Education, Culture and Sports Committee. It had been suspended since Nov. 12 in order to appraise the budget.

On the same day, lawmakers discussed bills on raising tobacco and corporate taxes next year, only to confirm that their standpoints differ. The NPAD claimed it won’t approve increasing taxes on tobacco, unless corporate taxes rise. The Saenuri argued that elevating corporate taxes will hurt the country’s economic competitiveness at a time when the economy is already suffering.