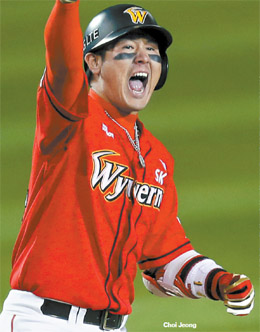 After negotiating with Choi on Monday, SK announced he had responded positively to the club’s largest-ever offer, and they would hammer out the details by Wednesday, the deadline for teams to retain their free agents.

The amount is unprecedented, but not unexpected. Last winter, the Wyverns gave Choi a 35 percent raise to 700 million won in hopes he would stay or the team would receive substantial compensation if he left.

Teams that lose free agents receive either 300 percent of the annual salary or 200 percent and a player. Experts predicted Choi would get 8 billion to 10 billion won for a four-year contract.

Choi was considered the cream of this year’s crop among 19 free agents. The 27-year-old third baseman has won Golden Gloves for the past three years and has 168 homers with a .292 batting average over his 10-year career with the Wyverns.

The LG Twins, meanhile, signed free-agent outfielder Park Yong-taik, who has spent 13 years with the team, to a 5 billion won, four-year contract.

And lefty pitcher Jang Won-jun decided not to rejoin the Lotte Giants. His likely destinations will be the LG Twins, managed by his mentor Yang Sang-moon, and the pitching starved Hanwha Eagles.

The NC Dinos, who joined the first division in 2013, also played a part in the skyrocketing price of free agents, signing Lee Jong-wook, Lee Ho-Jun and Son Si-Heon before the season. As an expansion team, the Dinos were not required to give up any of their players.

Meanwhile, the Kia Tigers announced on Wednesday they decided to keep their ace, Yang Hyeong-jong, refusing a bid from the Minnesota Twins of Major League Baseball after putting Yang in the posting system. The amount of the bid is unknown.