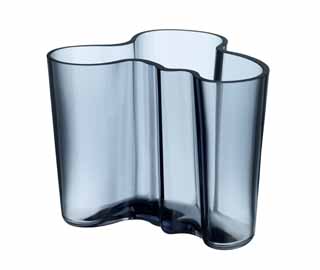 When Finnish Prime Minister Alexander Stubb came to Seoul last week, one of the first trips he made was to Lotte Department Store in Sogong-dong, central Seoul.

He was greeted on arrival by Shin Dong-bin, the company’s chairman, who escorted him to an exhibition by Finnish design brand Iittala on the shop’s 14th floor gallery.

Although Stubb was here for bilateral discussions with President Park Geun-hye, Fiskars Group’s Korean branch - which owns Iittala - said he also made time to see how Finnish companies are doing in Korea. 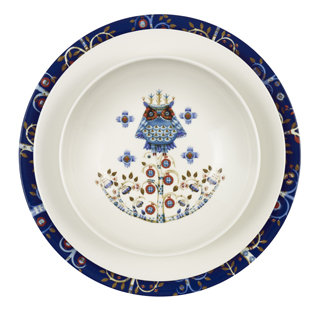 A plate from Iittala’s Taika range, which includes a pattern by Klaus Haapanieni.

Prior to the expansion, the brand organized the exhibition, which will run through Dec. 7, to showcase its colored glass ornaments and ceramics.

Scandinavian-influenced designs have been drawing attention from Korean consumers since around 2010.

Oh Dong-eun, CEO of Royal Copenhagen Korea - the name of Fiskars Group’s Korean branch - said she believes the “timing is optimal” for Iittala’s foray into Korea.

Royal Copenhagen was acquired by Fiskars in December 2012. 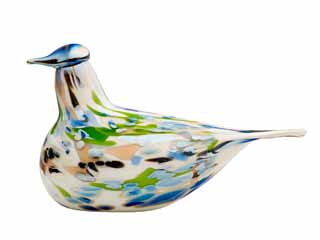 A bird from the Toikka collection that was created especially to mark the year 2014.

“I heard about five years ago that the northern Europe trend is entering Korea,” said Oh.

Such confidence comes from Iittala’s design philosophy to create “timeless design that will never be thrown away.”

“That, I believe, strikes a chord with Iittala’s design philosophy. Our products are timeless. Koreans will realize they can never be thrown away and that they’ll never grow tired of the designs.” 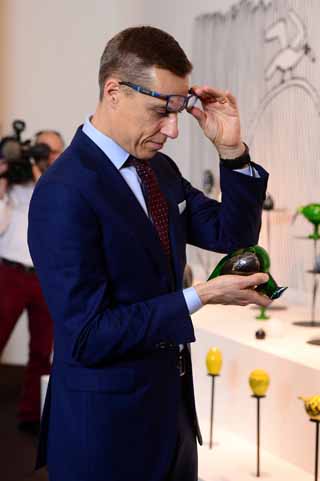 Finnish Prime Minister Alexander Stubb inspects at a bird by Toikka at the Lotte Gallery on Nov. 19. [NEWSIS]

Many of Iittala’s products, such as the famous Alvar Aalto vase collection from 1936, are still in production today. The brand started off as a glass factory in southern Finland in 1881. Today, most of its products, especially glassware, are handmade by craftsmen.

“Iittala is all about design classics,” said Paivi Paltola-Pekkola, Vice President of Fiskars Living, who visited Seoul for the event. “We focus on lasting design production that’s also easy to use and combinable.” 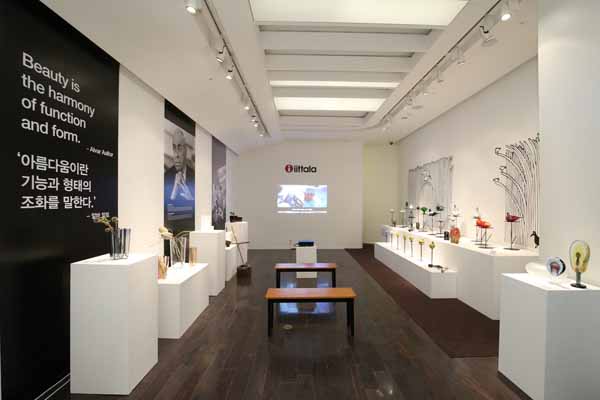 Finnish design brand Iittala is holding an exhibition, which runs through to Dec. 7, at the Lotte Gallery on the 14th floor of the Lotte Department Store in Sogong-dong, central Seoul. Provided by Iittala

According to Harri Koskinen, the design director of the brand, who also visited for the event, the “most fascinating aspect of Iittala’s designs is that consumers can play around with Iittala design products and have it how they would like it.”

He added that it’s easy to mix and match Iittala products.

Among Iittala’s wide portfolio of designs, Paltola-Pekkola said Birds by Toikka will be the most appealing to Korean consumers.

The ornaments, designed by Oiva Toikka in 1972, are created by glassblowers. More than 400 have been made over the last 40 years.

It’s the perfect timing for Iittala stores to be launched in Korea, said Oh, as items created by the first Korean designer selected to collaborate with the brand will launch in January.