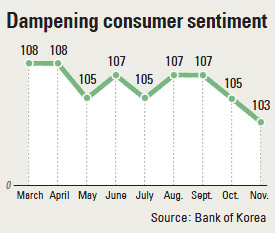 Consumer sentiment has fallen even lower than in the aftermath of the ferry tragedy Sewol in April, which unexpectedly dampened the overall economy.

A majority of people are still optimistic, but their numbers are declining as unfavorable external factors including slowing growth in China, deepening financial woes in Europe and a weaker Japanese yen threaten Korean exports.

The Bank of Korea announced Wednesday that the consumer sentiment index for this month lost 2 points from October to 103. A reading above 100 indicates that a majority of those polled are optimistic on economic growth.

But it is the second consecutive month that consumer sentiment has fallen.

The index is at its lowest in 14 months, falling lower than in May when sentiment quickly froze after the ferry tragedy, which was one of the worst maritime accidents in recent history, killing more than 300 passengers and crew.

In particular, this month consumers seem more doubtful of the economic recovery despite the government’s aggressive campaign to stimulate the economy, including two key interest rate cuts by the central bank.

The BOK lowered the interest rate in August and again in October to an all-time low of 2 percent, in the hopes of stimulating the economy by encouraging people to spend more and take out loans.

The move helped increase the amount of loans taken out, which reached a new height of more than 1,060 trillion won at the end of September.

However, the rate cut has done little to boost the economy, mostly because of deepening concerns over decelerating global economic growth.

Other than the United States, which is reporting its fastest growth in a decade, including 3.9 percent year-on-year gross domestic product growth in the third quarter, many countries are seeing limited growth.

China is expected to report its slowest growth in years and Germany and France are also expected to post disappointing expansion.

“There is a growing consensus that the economic recovery is slower than expectations,” said a BOK official. “Additionally external factors including steep depreciation of the Japanese yen as well as the end of U.S. quantitative easing also seem to affect sentiment.”