Samsung to sell units to Hanwha

Samsung to sell units to Hanwha 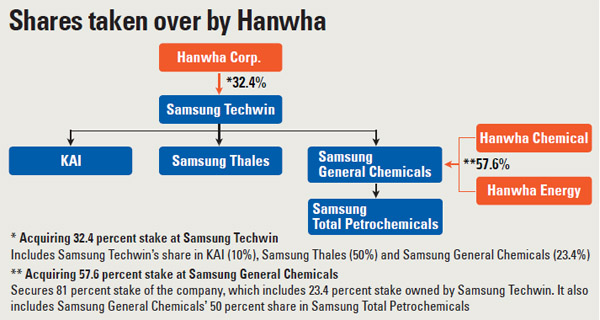 Samsung has taken another bold step in its corporate restructuring by deciding to sell off its defense and chemical affiliates to energy conglomerate Hanwha Group.

Samsung hasn’t sold a business unit in 17 years since the financial crisis of the late 1990s. The Hanwha deal is considered one of the biggest corporate deals between conglomerates in decades.

Samsung estimated that the sales, which are expected to be finalized in the first half of next year, will bring in 1.9 trillion won ($1.7 billion).

The affiliates Samsung Thales and Samsung Total Petrochemicals are automatically included in the sales.

Samsung Thales is a joint venture created with French company Thales in 2001. Samsung Techwin owns a 50 percent stake in the affiliate, which specializes in heat-sensing technologies and tracking devices.

Samsung Group said although Samsung C&T is giving up its position as the largest shareholder of Samsung General Chemicals, it will maintain a connection with Hanwha Group in the chemical business by holding onto an 18.5 percent stake.

In a regulatory filing, Samsung said it was selling the companies in order to step up its core businesses through “asset efficiency” and to use the money made in the sales to invest in new businesses.

Once the sales are completed, Samsung will be out of the defense industry, which it entered in the late 1970s.

In chemicals, however, Samsung has decided to keep Samsung Fine Chemicals, which specializes in manufacturing fine chemical products including polysilicon, which is an essential component in solar cell wafers and components supplied for secondary cell developments. These are key elements for Samsung’s next-generation businesses.

But the company is exiting from the petrochemical business.

For Hanwha, the acquisition will allow the group to become country’s ninth-largest conglomerate in terms of assets. According to data from the Fair Trade Commission, Hanwha is ranked as the 10th-largest chaebol with assets worth 37.6 trillion won.

Since the asset value of Samsung’s four affiliates is about 13 trillion won, Hanwha will leapfrog Hanjin Group, which has about 39.5 trillion won of assets. However, it won’t be No. 8, as GS Group’s asset value is estimated at 58 trillion won.

Since the deal includes the acquisition of Samsung Total Petrochemicals, it also will bring Hanwha back to the refining business for the first time in 15 years. In 1970, Hanwha established Kyung-in Energy Development jointly with Union Oil (now ConocoPhillips), but it sold the business in 1999 to Hyundai Oilbank.