Doosan serves as an incubator for young artists

Doosan serves as an incubator for young artists 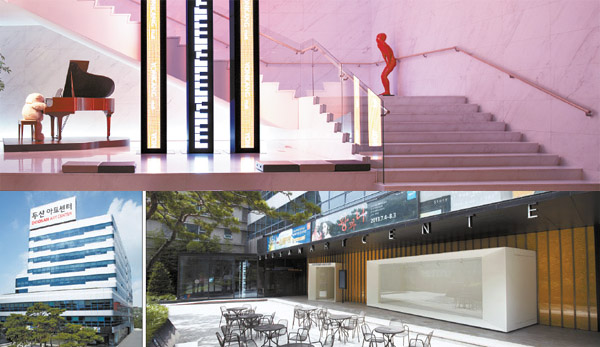 Top: An interior view of the Doosan Art Center in Jongno District, central Seoul. The building has many installations that can be used as photo zones. Above right: It has a terrace outside where visitors can sit down and relax. Above left: The exterior of the art center. Provided by the art center

Artists sponsored by Doosan Group said they struggled before receiving funding from Korea’s 12th-largest company. Many were even worried that they would have to give up on their dream careers.

But with the assistance they received from the conglomerate’s Doosan Art Center and Doosan Yonkang Foundation, their talents - whether in theater, design or fine arts - were able to flourish.

Playwright Kim Eun-sung remembers how thrilled he was to have a stable outlet to communicate with the public thanks to the heavy industries firm.

“Hypothetically speaking, this means that artists I work with can spend less time cleaning dirty toilets at a studio in a dingy building or can keep better vocal conditions at a cleaner studio so that they won’t waste more time in doing other things than practicing,” he said.

Right: Artist Kim Young-na, also known as Na Kim, has conceptualized her experiences into an exhibition. Center: Kim Sang-don’s photo “Monument Zero #2” was inspired by the many accidents that happened in Korea this year, including sinking of the Sewol ferry in April that resulted in many deaths. Left: Artist Jang Ji-a expresses instincts embedded in human nature such as pain and pleasure or violence and beauty.

Lee Ja-ram, a singer specializing in the traditional Korean performance art pansori, likens Doosan to what Google provides to some start-up entrepreneurs: an incubator.

“It keeps track of the working conditions of artists as well as the struggles they have and then provides a better work space so that the artist can focus on working on their projects and nothing else,” said Lee.

These individuals received the opportunity to practice their craft through Doosan Art Center, which provides a helping hand to young artists, garnering attention for them from industry experts or the public.

Once chosen for financial support, the center works with the artist for up to five years, providing financial help for performances or exhibitions or by giving consultations to flesh out the rough ideas they come up with.

It even sends some creative individuals overseas to open their eyes to the international arts scene.

Doosan’s Artist Incubating Program may not bring the company any immediate recognition or quick monetary rewards, but the center has a strong belief that what it is doing is for society’s greater good.

“There are other companies that bring in masterpieces to Korea, and that’s their position in making a social contribution. But its not ours,” said Kang Seok-ran, Doosan Art Center’s artistic director and the managing director of Doosan Yonkang Foundation.

“We focus on looking for artists who have not yet fully blossomed and providing an incubator so that they grow further and have their name and work become more recognized in the field.”

The root of sponsorship

Doosan Art Center has not always had this policy, however. The organization was founded in 2007 when the company’s Yonkang Hall, an arts space, was renovated.

The group wanted to reform its cultural activities to celebrate its 111-year history and to align its projects with the company’s slogan, “People Are the Future.”

“We think the concept of incubating young artists matches with the core value the group carries,” said Kang.

“So we have decided to put an emphasis on helping artists who struggle.”

In addition to applying a more modern look to the building, the group proposed that it should help out struggling artists.

Besides having a large theater that can seat more than 600 people, Yonkang Hall opened the smaller Space 111 for plays of a more experimental nature by local writers, actors, directors and performers. Doosan Gallery, where local fine art specialists can show off their creativity, was also founded.

“The artists we are sponsoring are not all Nam June Paik, but they are taking it step by step to establish their style,” said Park Chan-jong, deputy manager of Doosan Art Center, who has been working for the company since 2007.

“They just need a little encouragement so that they can keep their will to make things happen.”

To further encourage young artists, the center established the Doosan Artist Award in 2010. Champions of the theater division earn 30 million won ($27,049) in prize money, along with funding to produce a show on stage. Artists can win 10 million won and are provided with a studio and housing in New York for six months.

“I was able to test myself in an attempt to resolve the conflicts I had about whether I should define myself as a designer or as an artist,” said Kim Young-na, also known as Na Kim, who has worked as a product and visual designer.

The artist said she is currently going through a transitional period in which she is incorporating functional design into fine arts - a concept that even many artists are not that familiar with.

In her exhibition, Kim attempted to turn the feelings visitors experience at an exhibition into tangible art pieces.

“By working with Doosan, I got to set my own foundation by looking at how other artists work and what their products are like,” Kim said.

“I managed to become more flexible and position myself as an artist who sees [products] as a designer would.”

A foundation for growth

To make it possible for artists to find answers to their own creative questions, the center rarely meddles with its sponsors’ ideas - unless they ask for help.

The center says it wants artists to develop their own creativity by performing or holding exhibitions.

“In the world of theater, it is often said that Doosan Art Center doesn’t seem to work under the shade of the group much and that it lets artists really contemplate the subject matter they want to deliver to the public and speak up through their works,” said playwright Kim Eun-sung. “It was possible for me to not worry too much about reading the thoughts of art center officials, which is a very rare experience for local artists to have.”

The art center plans to present how its sponsorship over the last 12 months has allowed three artists to grow.

In the exhibition, which will last until Dec. 31 at Doosan Gallery Seoul, the artists will show how their involvement in an art scene overseas has opened their eyes further and how they managed to incorporate new experiences into their work.

Kim Sang-don and Kim Ji-eun explore what they observed in the modern city in their recent work, while Jang Ji-a focuses on symbolizing a more conceptual idea - the harmony between pain and pleasure or violence and beauty.

“We have seen that the opportunities we have given to the artists have led them to experience a turning point in their career,” said Kang So-ra, public relations manager at Doosan’s art center.

“As they receive a chance to present their experiments and changes to the public along with other artists who won the same award, it helps them learn how responsive the public can be to their style as well as allows them to become more inspired by conversing and sharing ideas with fellow artists.”

Besides getting artists to develop new, high-quality ideas through a variety of creative genres, the center also strives to educate more people about diverse art forms to foster a larger target audience for performances and exhibitions.

Through the center’s efforts, people who lack expertise in the arts can acquire a better idea of what’s happening in the current art world and learn how the scene has evolved. Eventually, they can come to appreciate exhibitions or performances to the fullest, the center hopes.

The Doosan Humanities Theater Series is one of the center’s largest educational programs, which usually lasts from March to June.

The center has offered three to four plays, one exhibition and more than 10 lectures under a theme it sets for the year since the program was first launched last year.

Visitors can cherry pick the individual events of interest to them or sign up to take part in them all.

Admission to lectures and exhibitions are free while prices of tickets to plays vary.

The center also invests in discovering talent within the student population or reaches out to people who it feels has the potential to become part of the arts industry.

Doosan Art School for Kids has invited elementary school students to see exhibitions and performances and have them share their thoughts and inspirations since 2012.

This year, it started a new pilot program to allow high school students to have serious talks with industry experts and discuss developing their career in the arts.

The center invited musical performer Choi Jung-won and dancer and choreographer Ahn Eun-mi of the Ahn Eun-mi Company to meet with teenagers and share their insights about making it in the creative industry.

Another pilot program the center has attempted this year is a backstage tour. The first-ever session, held earlier this month, not only included a look around an area the audience is normally restricted from, it also gave an insight into the process of how a performance is put together.

Two more test schemes scheduled for next month were all fully booked as soon as the center posted an announcement to its website.

“Although we are still testing some programs and nothing is yet to be finalized, one thing for sure is that we are going to continue researching ways to provide diverse seminars or other opportunities so that we can better educate locals here,” said PR manager Kang.

For more information about upcoming exhibitions, performances and lectures, go to www.doosanartcenter.com or call (02) 708-5001.