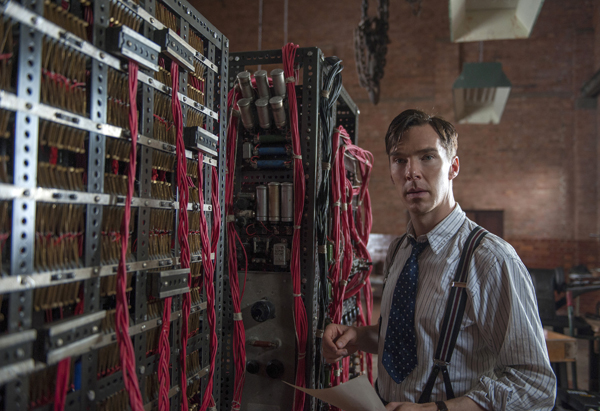 In this image released by The Weinstein Company, Benedict Cumberbatch appears in a scene from “The Imitation Game.” [AP/NEWSIS]

Characters of analytical prowess and fast-deducting intellect have made Cumberbatch something like the ultimate quicksilver mind of the digital age. No actor has made computation sexier.

Cumberbatch, relaxing in a Toronto hotel room, quickly points out that he has - like his spineless plantation owner of “12 Years a Slave” or his painfully shy son in “August: Osage County” - played some “pretty dull, ordinary” people: “Let’s say us. I’ve done us, version of me and you,” he says.

And yet Cumberbatch is clearly drawn to complex, real-life characters under extraordinary circumstances, roles that demand technical preparation (an accent, a stammer), considerable biographical research and a precision of approach. Puzzles to be solved.

“Maybe that’s a fair one,” he says, turning over the idea. “Maybe I do. I think for the reasons people are attracted to those characters, as well. You can never fully understand them. There’s always a certain amount of enigma or mystery to them.”

“The Imitation Game” is about how Turing and others at Britain’s Bletchley Park solved the seemingly unbreakable Enigma code used by the Germans throughout WWII.

Winston Churchill said Turing made the single greatest contribution to the war, but his achievement wasn’t widely recognized until recently, when the code-breaker’s work was declassified.

“Considering all of that, why the [expletive] isn’t he on the front cover of every school history textbook?” says Cumberbatch. “He’s a properly important figure in our culture.”

“The Imitation Game” is only partly a traditional wartime thriller. It’s also a tragedy of social close-mindedness. Turing was gay at a time when homosexuality was illegal in Britain. He was convicted of indecency in 1952 and then chemically castrated. Two years later, just 41, he killed himself by eating a cyanide-laced apple (though there remains some debate about his intentions).

“I see somebody who was tragically damaged and continually battered by an intolerant, non-understanding world - the very world he was trying to save and liberate from fascism,” says Cumberbatch.

“The Imitation Game,” directed by Norwegian filmmaker Morten Tyldum and written by Graham Moore, is a kind of ode to outsiders. Cumberbatch’s Turing isn’t just different because of his sexuality, he’s utterly antisocial. Rarely making eye contact, etiquette disinterested the single-minded Turing. “I don’t care what’s normal,” he says in the movie.

His Bletchley collaborators also included Joan Clarke (Keira Knightley), a rare female in that world. Knightley says the film “is about trying to celebrate differences because of the tragedies that can occur when you destroy the people who aren’t like you.”

The film’s mix of historical drama with contemporary resonance has won it acclaim on the festival circuit and positioned it as an Oscar contender. Especially lauded has been Cumberbatch’s depiction of a mathematical mind wracked by repression.

“He can play so many emotions at the same time. There’s strength and vulnerability. There’s arrogance and there’s this lonely boy,” says Tyldum.

“It’s not every actor that can play a genius.”