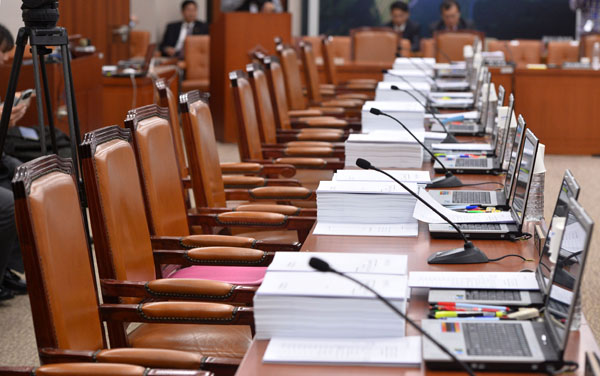 A meeting room for the National Assembly’s Land, Infrastructure and Transport Committee is vacant Wednesday after the opposition NPAD lawmakers boycotted all legislative activities. [NEWSIS]

The opposition New Politics Alliance for Democracy (NPAD) unexpectedly boycotted all proceedings at the National Assembly on Wednesday, citing failure to negotiate with the ruling Saenuri Party to finance free day care for young children.

The unexpected parliamentary deadlock raised fears that the Assembly will again miss the legal deadline of Dec. 2 for passing next year’s budget bills.

The Assembly is notorious for its end-of-the-year tug-of-war over the government’s budget plan.

On Tuesday, lawmakers from both parties appeared to have reached a breakthrough deal on day care by agreeing that local authorities rather than the central government should finance the so-called Nuri day care program, an educational welfare project that aims to improve overall development of children aged 3 to 5. However, just hours later, they clashed over the size of the Nuri budget.

The NPAD insisted that the central government should provide 523.3 billion won ($472 million) - the net increase in the Nuri program for the next year - from the public purse, while the Saenuri offered a range between 200 billion won and 500 billion won on the condition that the shortfall be paid by local education offices.

“Unless the ruling party comes up with an improved version of the bill on the Nuri program, we can’t cooperate on the proceedings,” the NPAD said in a statement.

The Saenuri appeared aghast at the NPAD’s abrupt decision to boycott the Assembly and raised suspicions that the main opposition party was trying a brinkmanship strategy to get its way.

“Everything was going smoothly and amicably, but then [the NPAD] suddenly suspended the meeting,” said Kim Jae-won, deputy floor leader of the Saenuri.

“We thought we almost agreed on the Nuri budget, and it’s hard to understand why the opposition is showing such an attitude.”

One of key members of the ruling party said he suspected the opposition intends to block passage of the pending bills at all standing committees.

“Aren’t they aiming [to obstruction proceedings] as leverage for negotiations on such issues as raising corporate taxes?” he asked.

“We will follow the law,” said Lee Wan-koo, floor leader of the Saenuri. “State affairs are supposed to be done under the framework of law and principles.”

Floor leaders of the two parties agreed to discuss matters Thursday morning at a restaurant near the Assembly building.

In the meantime, Assembly Speaker Chung Ui-hwa designated 14 auxiliary budget bills for the next year in a desperate effort to meet the deadline for the passage of the budget. This was the first time the Assembly speaker used his power to implement such a measure as stipulated in the 2012 National Assembly Advancement Act.

“I have notified the designation to five related standing committees,” he said in a briefing at the Assembly. “Starting with the current regular session of the National Assembly, we must abide by the deadline for passage of the budget bills as stipulated in the Constitution, leaving a historic milestone of Assembly management.”

He asked standing committees in the fields of strategy and finance, education and culture, safety and public administration, and industry and welfare to wrap up reviews of the auxiliary bills by Nov. 30.

If lawmakers fail to finish examining the budget bills by the deadline, the versions drafted by the government will be automatically submitted to the plenary session the following day of Dec. 1 under the National Assembly Advancement Act - the worst-case scenario for the parliament.

The speaker’s move further angered the opposition, which claimed the auxiliary bills included those directly and indirectly related to a bill raising taxes on tobacco. The two parties have major differences on collecting more tax money from cigarettes. The NPAD says higher cigarette taxes will hurt the lower-income brackets and are insisting on a hike in corporate taxes. The Saenuri argues that elevating corporate taxes will deal a blow to the country’s economic competitiveness at a time when the economy is already suffering.

Implemented in May 2012, the National Assembly Act’s Article 85 aims to prevent any political party from dominating the parliament through its majority. A bill requires the consent of three-fifths of lawmakers before it can be put up for a vote. But since budget bills failed to pass the National Assembly by their deadlines every year since 2003, the parties decided to introduce a special system for them that requires automatic submission of budget bills to the plenary session.

Meanwhile, an executive member of the NPAD told reporters Wednesday that the party is considering dealing with the controversial bill to reform the pension system for civil servants next April, despite the government and the ruling Saenuri’s wish to see it dealt with by the end of the year.

“It’s true that civil servants receive relatively larger pensions,” said the source, who asked to remain anonymous. “But we should discuss the bill over a sufficient period of time. Given that we have a party convention in February and need to take into account variables, including parliamentary investigations into corruption cases involving the previous administration, some time around April seems appropriate.”