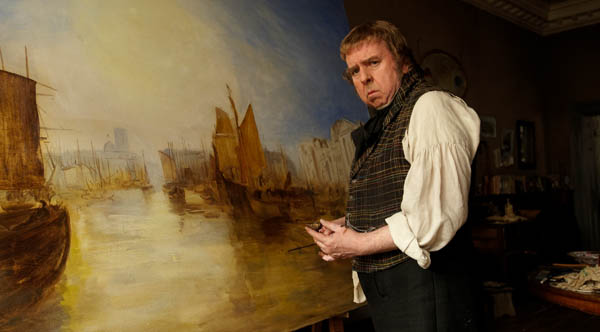 Timothy Spall plays J.M.W. Turner, considered to be one of the greatest British artists, in the biopic “Mr. Turner” directed by Mike Leigh. Provided by Sony Pictures Classics

LONDON - With an epic sweep worthy of a J.M.W. Turner masterpiece, a new portrayal of one of Britain’s greatest painters is winning the Romantic artist a new generation of admirers.

Joseph Mallord William Turner overturned 19th-century conventions by painting the vitality of his age, challenging the boundaries of realism and abstraction with a boldness that prefaced Impressionist greats such as Claude Monet and Camille Pissarro.

More than 150 years after Turner’s death in 1851, Mike Leigh’s film “Mr. Turner” explores the life of the grunting London-born son of a barber who used rags, spit and his thumbnail to create some of Britain’s most impressive paintings.

“Everybody can find their own Turner,” David Brown, Tate curator of British Art in the 1790-1850 period, told Reuters. “He has so much to offer. It’s the sheer color and excitement of the paint which people respond to.”

Brown said he wanted to show off the breadth of Turner’s work, putting it back into its context without portraying him as just a stepping stone to later movements such as the Impressionists or abstract expressionists.

Sometimes unpleasant and even unkind, the Turner of Leigh’s film can also be charming and fun, bursting into song to entertain his lover, Sophia Booth.

Behind the artist’s swagger lay his genius. In one scene, while the finest artists of the day are putting finishing touches on works hanging at the Royal Academy, Turner strides up to his own painting of ships at sea and daubs a brazen stroke of red in the center, later fashioned into a buoy.

The cavalier gesture infuriates - and steals the thunder from - his great rival John Constable, laboring away meticulously at his magisterial “The Opening of Waterloo Bridge,” the work of more than a decade.

Director Leigh is known for spending months with actors before filming to develop characters, and using improvisation to help create the script. The portrayal of Turner won the best actor prize at Cannes for regular Leigh collaborator Timothy Spall, leading to inevitable Oscar buzz.

It has also drawn visitors to the gallery to see the work.

“The film revealed such a fascinating personality and showed his work so beautifully that I felt it was a perfect opportunity to then see the pieces firsthand,” Zoe Hamilton, 31, said among the crowds at the Tate’s “Late Turner, Painting Set Free.”

The late works on display are from a period when Turner had lost favor with critics of the day, who questioned his sanity and lurid colors. In the film, he is mocked on stage at the theater. Even Queen Victoria is shown scorning his later works.

But it was the art from this period, when Turner battled ill health and derision to blur the limits of reality in his paintings, that has also elicited the greatest response from subsequent generations of artists from Monet to Henri Matisse.