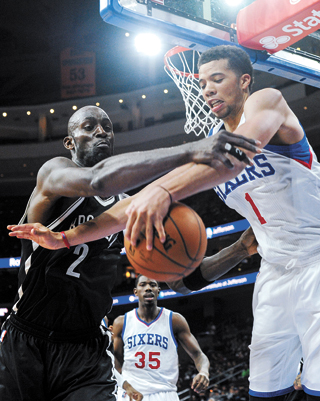 Anderson scored 10 of his 12 points in the final period, and Brooklyn beat Philadelphia 99-91 on Wednesday night, local time, to extend the 76ers’ season-opening skid to 15 games - matching a franchise record.

Philadelphia rallied from a 20-point deficit in the first half to take the lead early in the fourth quarter, but Anderson and Mirza Teletovic stepped up down the stretch for the Nets. Teletovic had six of his nine points in the fourth.

“You can say, ‘This team is winless,’’’ said Nets coach Lionel Hollins. “But they are still NBA players and they still compete. Unfortunately, they don’t have any wins yet and we’re glad they didn’t get one against us.’’

Lopez was a member of the 2009-10 Nets team that set the NBA mark for consecutive losses to start the season with 18, and he knew the 76ers would keep battling.

“They are all NBA teams,’’ he said. “I know what it’s like to go out there every night trying to get a win, so you’ve got to keep playing.’’

K.J. McDaniels and Tony Wroten scored 18 apiece for Philadelphia, which matched the 1972-73 76ers who started with 15 losses on their way to setting an NBA record for fewest wins in an 82-game schedule at 9-73.

“I see good things,’’ said coach Brett Brown. “It’s unfortunate for those guys. I bleed for those guys that they can’t get a win to validate the work they have put in.’’

The Sixers could break the Nets’ record with a loss to Oklahoma City on Dec. 5.

Philadelphia will try again for its first win when it hosts Dallas on Saturday. Then the Sixers get San Antonio at home on Monday and travel to Minnesota for a Dec. 3 game before returning home to play the Thunder.

Philadelphia became the eighth team in NBA history to begin the season with at least 15 straight losses. Only four teams have ever started with more than 15 straight defeats.

“I thought we came out here and did a good job,’’ Philadelphia’s Nerlens Noel said. “We were down sometimes, but we showed our resilience just coming back and playing hard to get back in the game.’’

Brooklyn scored the first nine points of the second half to go up 58-41 on Bojan Bogdanovic’s layup. But Philadelphia outscored the Nets 26-14 in the final 8:58 of the third quarter to pull within five heading into the final period. AP