Atletico and Arsenal seal spot in next UEFA round

Atletico and Arsenal seal spot in next UEFA round 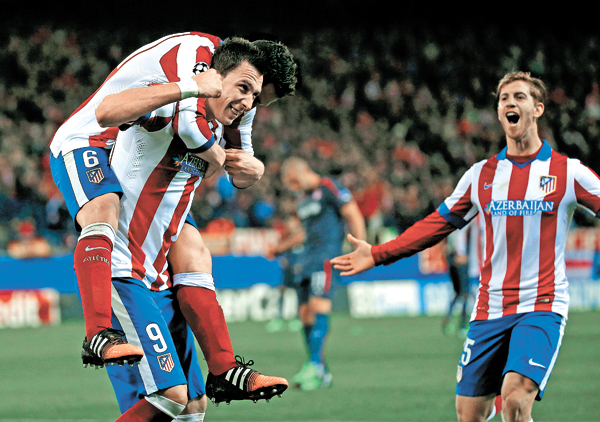 Atletico Madrid’s Mario Mandzukic, second from left, celebrates with teammates Jorge “Koke” Resurreccion, left, and Cristian Ansaldi after scoring a goal against Olympiakos during their Champions League Group A match at the Vicente Calderon stadium in Madrid on Wednesday. [REUTERS/NEWS1]

Striker Mario Mandzukic scored a hat-trick as Spanish champion Atletico Madrid thrashed Olympiakos 4-0 to reach the Champions League knockout phase on Wednesday, while Arsenal also went through with a convincing 2-0 win against Borussia Dortmund thanks to another superb goal from Alexis Sanchez.

Bayer Leverkusen likewise advanced despite a 1-0 home defeat to Monaco.

Elsewhere, Real Madrid notched a 15th-straight win as Cristiano Ronaldo grabbed his 71st Champions League goal in a 1-0 win at FC Basel, while Liverpool’s defensive woes surfaced again in a 2-2 away draw at Bulgarian side Ludogorets.

Five-time European champion Liverpool, which has four points, is two behind Basel in Group B and hosts the Swiss side next.

Meanwhile, Italian champion Juventus steered itself to within touching distance of qualifying with an assured 2-0 win at Swedish side Malmo.

Atletico, last season’s runner-up to Real, has 12 points in Group A and Juve has nine. They meet in Turin in two weeks. Olympiakos has six points.

“We withstood Malmo’s pressure in the first half but we improved after the break,’’ Marchisio said.

France striker Karim Benzema set up Ronaldo near the penalty spot in the 35th minute for his 26th club goal in all competitions.

Liverpool Coach Brendan Rodgers was under pressure after a run of four straight defeats, and things did not look like improving when Spanish midfielder Dani Abalo put Ludogorets ahead in the third minute.

Rickie Lambert leveled for Liverpool and midfielder Jordan Henderson turned in Raheem Sterling’s pass to make it 2-1 before the break.

The pressure will alleviate on Arsenal Coach Arsene Wenger as the Gunners reached the knockout stages for the 15th-straight season.

“It’s not easy to be consistent so I am very proud of that,’’ Wenger said. “We want more.’’

Arsenal went ahead in the second minute through inexperienced striker Yaya Sanogo’s first competitive goal for the North London club. Sanchez then curled a delightful shot into the bottom corner from 20 yards out for his ninth goal in eight games.

“We were overrun by Arsenal in the first 10 minutes,’’ Dortmund midfielder Ilkay Gundogan said. “It was a deserved defeat.’’

Arsenal has 10 points and is two behind Dortmund in Group D.

In the group’s other match, Anderlecht qualified for the Europa League by beating Galatasaray 2-0, with defender Chancel Mbemba scoring twice.

In Group C, Monaco and Zenit St. Petersburg are vying to qualify.

Leverkusen, which has nine points, was sure to advance because Zenit beat Benfica 1-0 in the earlier match thanks to midfielder Danny’s winner.

Monaco has eight points and Zenit has seven. AP