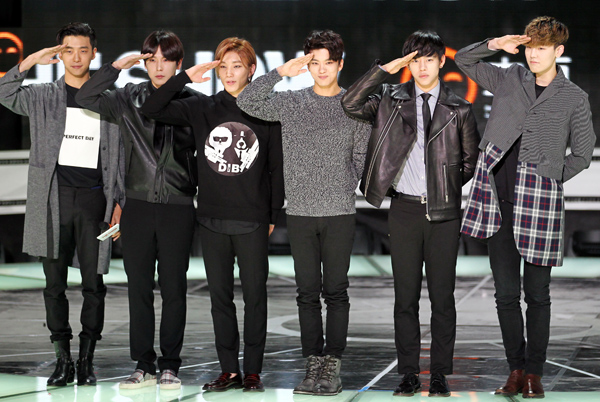 Members of boy band B.A.P. pose at SBS’s TV station in western Seoul in October. They began proceedings to sue their agency, TS Entertainment, on Wednesday. By Kim Min-gyu

All six members of K-pop boy group B.A.P. have joined forces to sue their agency, TS Entertainment, to nullify the validity of their contracts, according to an exclusive report by a local media outlet.

The lawsuit was submitted to Seoul Western District Court on Wednesday.

In the complaint, the boy group’s members said they signed contracts with the agency in March 2011, but that they have been treated unfairly because of the stipulations stated within them.

The members said they have earned more than 10 billion won ($9.11 million) for the agency in the three years since their debut but that each member has only received 18 million won.

“Despite unfair contracts, the boy group has released 11 albums so far and has performed in Korea, China, Japan and Mexico,” the members stated in the lawsuit.

TS Entertainment said it will release a statement soon after it has reviewed the lawsuit.

Having started in 2012 with the mini-album “Warrior,” B.A.P. has produced hits such as “Crash” and “One Shot.”

Some K-pop group members have filed similar lawsuits against their agencies in the past, such as Kris and Luhan of boy group Exo, but this is the first time a whole boy group has sued its agency, citing unfair contracts.

B.A.P. has been keeping a low profile. The group recently canceled its tour in South America.