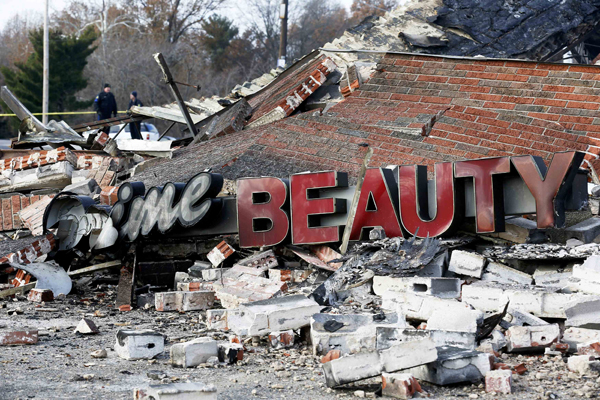 The remains of Beauty Town, which was burned in violent protests in Ferguson, Missouri, Tuesday. [REUTERS/NEWS1]

The violent protests in Ferguson, Missouri, over a grand jury decision not to indict a white police officer who fatally shot a black teen destroyed two Korean stores.

Among the roughly 20 stores that are run by Korean nationals in Ferguson, two were burned down and another five or six were looted or had their windows broken as of Wednesday, according to the Korean American Association of St. Louis.

The cost of damages has exceeded $2 million.

The stores, most of which sell cell phones and beauty products, were attacked because they are on a road leading to the Ferguson Police Department.

Local police are reportedly blocking that road now, although business owners were recommended to suspend their businesses as people continue to protest the decision over Officer Darren Wilson, who fatally shot 18-year-old Michael Brown in August.

Beauty Town, a hair and beauty supply store, was one of the two stores torched.

“I was expecting a massive protest after the verdict, so I locked the door and boarded up my windows just in case,” said Kim Seung-yeon, owner of Beauty Town. “But I never imagined they would burn down my shop.”

Lee Jae-ung, deputy consul general of the Korean Consulate in Chicago, which oversees Missouri, said the full scale of damages to the stores have yet to be calculated.

No casualties or injuries were reported.

Korean business owners in the unsettled city said the chaos was a huge blow to their pre-Thanksgiving sales, but said they weren’t targeted for their race.

The protests spread to many other American cities in the days after the controversial grand jury decision, but they were largely peaceful.

After months out of the public eye, the 28-year-old Wilson appeared in a television interview on Tuesday.