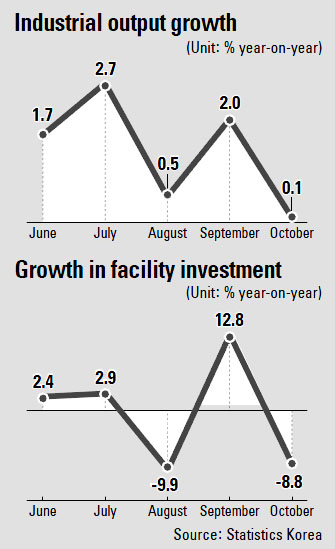 The nation’s aggregate industrial output inched up 0.1 percent in October compared to a year earlier, providing a sigh of relief over the recovering performance.

Statistics Korea announced Friday that a slight climb in total industrial production was due to increases in the service, construction and public administration sectors.

The figure dropped 0.6 percent in August and 0.8 percent in September.

Production in the service industry expanded 2.6 percent year-on-year and 0.8 percent over September, mostly because of growth in the financial and real estate sectors.

Despite 5.3 percent growth in automobile production, the manufacturing sector posted a 1.6 percent decrease in production compared to September.

But private consumption and investment continued shrinking last month despite the government’s fervid efforts to encourage spending by households and businesses.

In October, total retail sales fell 0.3 percent compared to the same month last year, and 0.4 percent from a month earlier.

The Bank of Korea announced Wednesday that consumer sentiment has fallen even lower than in the aftermath of the Sewol ferry tragedy in April, losing two points from October to 103. A reading above 100 indicates that a majority of those polled are optimistic on economic growth.

The Ministry of Strategy and Finance evaluated the current pace of economic recovery as too slow.

“Despite the three-month growth in service output and the slight increase in construction investment, general economic recovery is still weak as the lower manufacturing production and facility investment showed,” said Kim Byung-hwan, director at the economic policy bureau of the ministry.

“Although business sentiment is showing some signs of improvement, consumer sentiment is being contracted largely due to external factors such as slowdowns in advanced countries.”

The ministry is hoping that the improving housing market and stock market will drive up sluggish consumption.