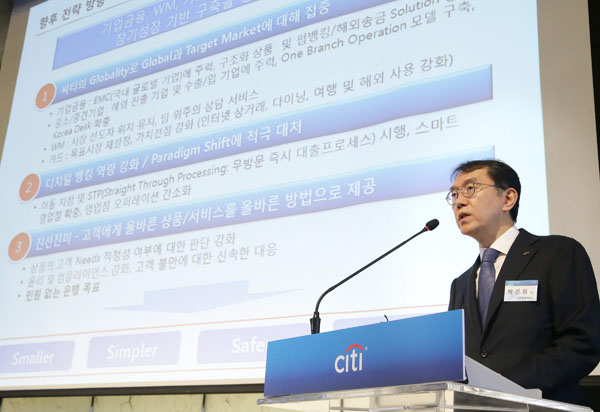 Park Jin-hei, CEO and president of Citibank Korea, unveils his goals as leader of the U.S.-based financial institution at the Plaza Hotel in central Seoul on Friday. [NEWSIS]

The top priority for Park Jin-hei, the new CEO and president of Citibank Korea, is to make the Seoul-based U.S. financial institution a “bank with no consumer complaints.”

At his first press conference at a hotel in downtown Seoul on Friday, Park revealed his plans in leading the institution, which suffered fierce confrontations between labor and management under former leader Ha Yung-ku and controversies related to its poor performance.

Park is the second Korean to head the local branch of the institution, which has its headquarters in New York. His predecessor Ha held the post for the past 14 years.

“As a financial expert, I want to materialize the finances that I want,” Park said. “It will be difficult to reach, but my foremost goal is to focus on customers and hear no complaints from them.”

Park said he would focus on what he considered to be Citibank’s four strengths: corporate banking, small-business lending, wealth management and its cards business.

“Citi used to lead both the retail and corporate banking markets by introducing new financial services such as the first concept of private banking and its 24-hour service,” Park said. “This leading role should be continued in the corporate banking sector by serving as a bridge for Korean businesses to reach the world.”

But Park acknowledged that Korea has low returns on equity and assets when compared to other Asian countries.

“We will mull over measures to raise profitability,” Park said.

But Park acknowledged that it wouldn’t be easy for him to oversee a major turnaround next year, he said.

“We aim to see increases of 3 to 5 percent in lending and deposits next year, but the total profit would be similar to this year,” he said. “We hope to cut total costs next year slightly from this year.”

Due to large-scale restructuring carried out this year, the bank has seen a spike in costs. Citi Financial Sales Korea, known as CFSK, was integrated with Citibank Korea. A total of 56 bank branches and eight capital firm branches were consolidated, and 652 bank employees applied for voluntary retirement along with 109 capital business employees.

The holding company Citigroup Korea was ditched to create simpler and faster communication channels and to increase efficiency. “Because of the weakening correlation between the number of branches and low profitability, all the restructuring measures were inevitable,” Park said.

The number of face-to-face transactions at banks has plunged from about 7,700 a month in 2006 to 2,800 in June this year, Park explained. “Meanwhile, transactions on the Internet and mobile devices soared from about 11,000 to 30,000 during the same period,” he said. “However, there is no reason for additional restructuring in the near future, unless the cost surges.”

As for the controversy over excessive payments made by the Korea branch to the U.S. headquarters despite the bank’s falling profitability, Park insisted that the Korean branch is paying an appropriate amount calculated by accountants based on OECD standards.

“It is normal even for Korean banks that go abroad to pay the fee to their headquarters,” he said. “But this will have to be the issue of taxation, so we will comply with guidelines by the two countries’ tax authorities.”