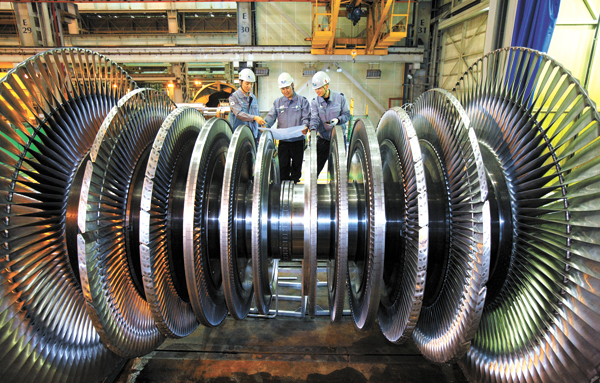 Doosan’s strategy to compete in the global market is to always be prepared. Rather than just upgrade its status as a company, the group seeks to fundamentally innovate its products, technologies and management system.

Doosan Heavy Industries and Construction, the largest affiliate, enhanced its power plant business by applying information communication technology (ICT) to its plant management system. Last January, the company opened a remote monitoring service center (RMSC), which can predict machine failure, alert workers of abnormal conditions and monitor the plant in real time. The data is transferred to the power plant’s main control room to assess the problem and provide solutions right away.

Last April, the company also opened a software center at its Seoul office, which collects RMSC’s data. That mass data is then analyzed and the center suggests ideas and programs for the plant’s maintenance and services, operations of the machines, and how the plant could be designed more efficiently.

The company won several power plant and water desalination plant construction projects in Vietnam, Saudi Arabia and Chile. In addition to its remote supporting system, the company is also strengthening its appeal to clients; improving the cost efficiency for construction, applying better technology to facilities; and expanding the range of turbines it produces.

Doosan Infracore, the machinery maker, is focused on fixing its business structure to boost its performance in the international market. The first target of its operations was quality control.

“Only the prepared will excel in the global market,” said a Doosan official. “With our changes, we will become a leader in the international market in the coming years.”