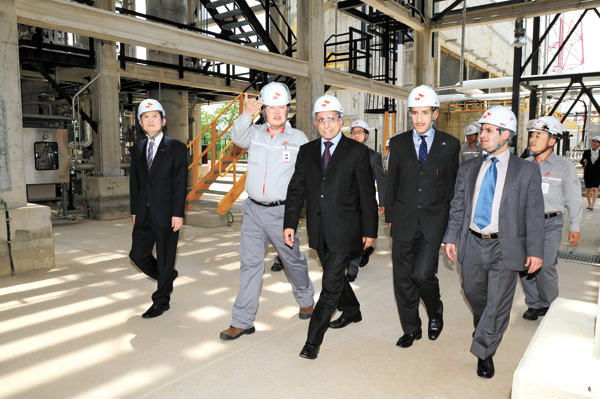 Mohamed Al-Mady, vice chairman of SABIC, third from left, and Masaed Al-Ohali, the vice president, fourth from left, visit the Nexlene plant in Ulsan on May 27.Provided by SK Group

SK Group found its way to international success through cooperation. The conglomerate’s new business model, “Global Partnering,” refers to joint overseas projects with international companies that are not merely financial institutions but those that create synergy.

One of the most successful examples of Global Partnering is SK Innovation’s polyethylene venture with Saudi Basic Industries Corporation, (SABIC). Although SABIC is the world’s largest ethylene producer, it lacked the technology to create high-performance polyethylene, which its rival companies Dow Chemical and ExxonMobil have.

SK, on the other hand, had its own technology to produce Nexlene, a high-performance plastic that can be applied to films, auto parts, clothes and cable coverings. However, the company was short on global awareness. The high price of ethylene was also an obstacle that kept the company from competing in the global market. The combination of the two companies was ideal, as each of them had what the other needed.

The group chairman, Chey Tae-won, played a crucial role in establishing the bond. While the company advisers were leaning toward making an independent domestic production line, Chey was determined to find a partner for SK. “Business limited inside the nation cannot outrun the competitors in the international market,” Chey said. “Even a top company with its own technology cannot excel in everything on its own.”

Another example is the company’s Chinese partner Sinopec, the largest state-run petroleum group, which joined SK in building an ethylene plant in Wuhan. The plant fulfilled the Chinese government’s plan to develop mainland China and SK’s aim to expand into the Chinese market.

The company also strives to build essential infrastructure such as energy and information-communication for overseas government bodies. It is currently working on a thermal power plant and an undersea tunnel in Turkey.