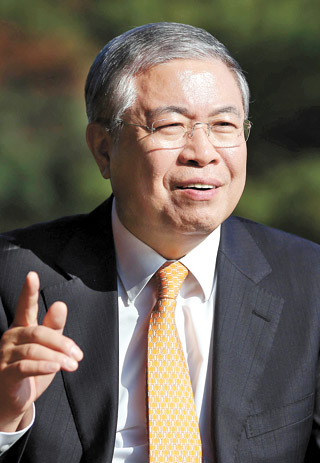 Kwon Young-gull was an industrial design professor for more than 30 years before he became chief design officer at Hanssem, the country’s leading furniture manufacturer.

Although Kwon has only been working for the company for eight months, he has recently been busy preparing lectures once again after Hanssem opened its design school Shinmunmyeong, which means “new civilization” in Korean.

He gave his first lecture on Nov. 22 and will conduct another one on Saturday under the theme “Design Revolution That Creates a New Civilization.” About 200 designers and university students will attend the talk.

The JoongAng Ilbo met Kwon, 63, at the design school in Wonseo-dong, central Seoul, to hear about his ideas of Hanssem’s future.

“What I want to do in Hanssem is develop a Korean design culture that could be a growth engine for the country’s companies and the country itself,” Kwon said. “I think it is time that we start developing more Korean-style designs and avoid using Western-style designs. The lectures are provided to develop design ideas that could lead trends in the world.”

Kwon said there are a few things Korea must to do in order to develop next-generation designs. The first is to unite the values of East and West.

In order to overcome such problems, he said people should try to create a new type of civilization that can bring people from the East and West together while coexisting with nature. He added that creative and revolutionary design will be one important element in realizing the idea.

“The design school will be a cradle for a new design development to create a new civilization,” Kwon said. “We will open the doors for designers, students and professors at universities and workers at companies to get them to participate in developing a Korean-style design cluster.”

The school reflects Hanssem’s strategies, which find growth in design and uses this to improve its capabilities and expand further.

“Our biggest goal in the [furniture] industry has been developing designs that are suitable to Korean culture and that can improve the overall quality of life for people,” Kwon explained.

Kwon said the typical living rooms that can be found in any apartments are an example of his idea. According to the chief design officer, the only differences between many apartments are size, but most are organized with a television as their centerpiece.

“Such style perfectly reflects the fact that so many people are just dominated by space regardless of their living style,” he said. “Space should be arranged by the people who live there. That is why Hanssem is trying to design spaces that people can communicate and make diverse activities. Furniture isn’t just simply things that fill an empty space.”