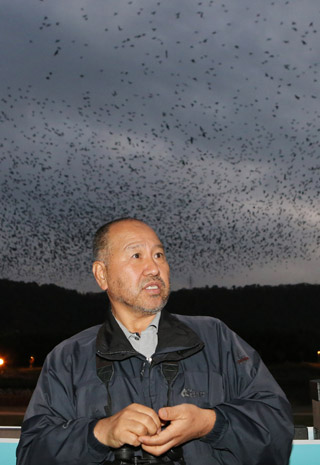 Researcher Kim Seong-soo says rooks, a type of crow, will coexist peacefully with white herons at Samho forest in Ulsan until next spring. By Song Bong-geun

The crow is widely considered an inauspicious bird in Korea. Traditionally, their squawks were believed to bring bad luck, and Alfred Hitchcock’s film “The Birds” contains menacing crowds of crows.

However, Kim Seong-soo, a researcher at the Institute of Ornithology at Kyungpook National University, has studied crows for five years and doesn’t find them auspicious at all .

“It is believed a crow and a white heron can’t coexist, but both species get along well at Samho forest in Ulsan,” says Kim. In the famous Korean poem “White Heron,” a crow is depicted as a disloyal subject, while the heron is faithful.

According to the Ulsan Metropolitan Council, Samho forest draws about 30,000 migratory crows from October to March. At 5:30 p.m. on Nov. 23, crows were perched shoulder to shoulder on electric wires and transmission towers, and as it started to get dark, they flew to the forest.

Rooks, one of the species of winter migratory crows, spend their summers in Siberia and Mongolia and come to Samho forest from mid-October to April. The number of rooks in Ulsan can be 30,000 to 80,000, he says.

When the sun rises, crowds of rooks fly to rice paddies in the Gyeongju area of North Gyeongsang to catch worms and eat grain.

“Each of those rooks discharges five grams of excrement, which means those rice paddies get 150 to 400 kilograms [330 to 881 pounds] of fertilizer every day,” Kim says. “That is another sign that crows are not an evil omen, but bring good luck.”

Kim starts his day at 4 a.m., before the rooks wake up. He says the birds leave their nests before the sun rises to avoid exposing the location to their natural enemies.

At dawn, Kim counts the number of rooks that leave Samho forest and repeats the counting when the crowds return. Because he cannot count every single crow, he draws imaginary lines on the sky to designate groups of 100 to 150 rooks. He also records the weather, temperature and level of light.

“I hope my research will be useful for anyone who studies crows and the ecosystem of Taehwa River,” Kim says.