The newest way to enjoy Jeju is to stay on the island for up to 30 days and spend quality time with family. Lee Gyu-ri, left, and her brother Ju-won are staying in Jeju with their mother for a month. By Kim Kyung-rok

Jeju Island is probably one of the few destinations that make almost any Korean feel giddy just thinking about it.

Until the 1960s and 1970s, it was a once-in-a-lifetime holiday destination for honeymooners.

As time goes on, the country’s largest island has become a lot more accessible, but it is still considered a primary getaway option for many vacationers because of its exotic nature and mild climate.

A pack of celebrities who recently settled on the island, including singer Lee Hyo-ri and her musician husband Lee Sang-soon, have also inspired many people who have had enough of city life.

Ordinary people have also been brave enough to quit everything and head down to Jeju in search of greener pastures in recent years.

But not everyone can make such extreme decisions. People may have jobs to think of or have to send their kids to schools on the mainland.

This is where the monthlong stay in Jeju comes in, a trend that is catching on - especially among families with small children.

The newest way of traveling to Jeju can be seen clearly from Seoul residents’ credit card spending.

Shinhan Card, the nation’s largest credit card company, collected and analyzed the spending of its credit card holders who live in Seoul but who stayed on Jeju for a certain period of time.

“Short-term travelers who visited Jeju between July and September have increased by 48 percent this year compared to 2010, but the number of long-term travelers who stayed on the island from 15 to 30 days soared 128 percent during the same timespan,” said Park Chang-hun, a team leader at the credit card company’s big data department.

“This data shows that the monthlong stay is the newest way to enjoy the island,” he added.

There were stark differences in the credit card spending of short-term and long-term travelers, too.

People who stayed on the island for a few days mostly spent on duty-free shops, five-star hotels and car rentals, but people who stayed longer used their plastic cards on groceries and gas.

“Long-term travelers tend to bring their own car instead of renting one,” Park said.

Lee Yeon-hee, a mother of two boys and the author of “Mother and Kids’ Monthlong Stay in Jeju” also agreed with Park. “I have seen more people who stay here longer since this year.”

She runs her own lodging, Lazy Mama, which is open to those who want to live in Jeju for just a month.

“After a monthlong stay, some decide to rent a house for a year,” she added.

Paying monthly is the most common way to rent a house on the mainland, but this option is not widely available on Jeju. Instead, people have to pay up a year’s worth of rent in advance, along with a deposit.

As a result, the first and most important thing to do if you want to enjoy Jeju slowly is to find a house that is available for four weeks or more.

In fact, a monthlong stay is not something new. Many people stay in foreign cities for a couple of months as a way to really get to know a place, but now people also want to spend quality time on Jeju instead of stopping over for a few days during the peak season.

“I’ve been running Lazy Mama over the past two years,” said Lee. “In the early days, only affluent housewives came to Jeju, but more and more ordinary people are visiting Jeju for a month.” 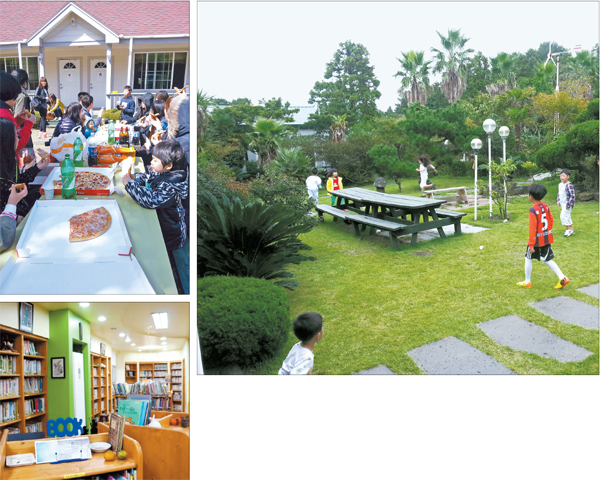 Targeting for families who wish to stay in Jeju for longer days, guesthouses are opening one after another. One is Lazy Mama, which has four houses separate that share a front yard. Provided by Lazy Mama.

People who choose to stay on the island for a month have their own reasons.

Kwon Go-eun, 39, who lived there for about 30 days four years ago with her 9-year-old son said she wanted to “live in a different place” when she quit her job.

“But I didn’t want to move to another country,” she added.

The locale is also suitable for families who have to live apart from their working fathers. Jang Yu-suk, 39, who is in Jeju for a month with her children, said, “My husband comes to see us on the first and the last week of the month.”

According to the data analyzed by Shinhan Card, families made up of people in their 30s and 40s are leading the trend of remaining in Jeju for a month. What motivates these young parents to move to the island is a desire “to become a better father or mother.”

Almost all the mothers who stayed in Jeju for a month said they wanted to spend quality time with their kids before they grow up.

Kwon, the mother who stayed in Jeju after quitting her job, recalled, “I think I ran, ran and ran with my child when I was living in Jeju ... We stopped by any beach and pasture whenever we found out nice-looking places. We swam and ran together all day long.” 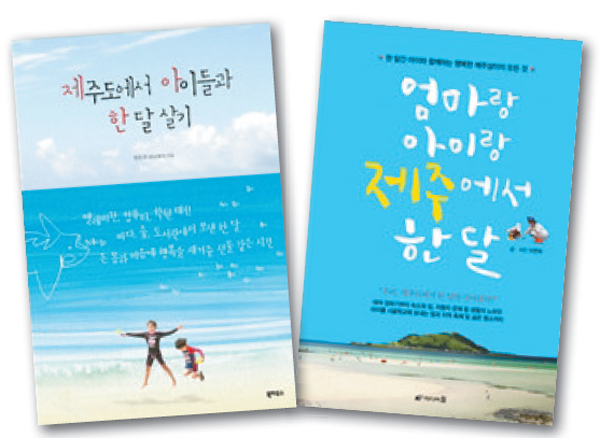 Books that give tips on how to live for a month or so on Jeju Island.

Lee Gyu-ri, Jang’s 7-year-old daughter, said, “I wish I could live in Jeju forever because I can run all day long at the front yard ... When I was living in an apartment in Goyang [Gyeonggi], my mother always told me not to run. But I love Jeju because I can go to the beach anytime I want.”

The fee for four weeks varies depending on the type of lodging, but the average cost is between 1 million won (about $900) and 1.5 million won.

Getting a good grip on the characteristics of Jeju’s four districts is also helpful to enjoy your time there.

Unlike during a short-term stay, things like transportation and access to convenient facilities should be taken into consideration when choosing a place to live on Jeju.

Jeju City, where the international airport is located, has milder weather compared to other parts of Jeju, and its transportation is far better. The city is also equipped with discount stores, hospitals and other facilities.

But for those who prefer to surround themselves with nature, Seogwipo or the eastern part of Jeju is better. 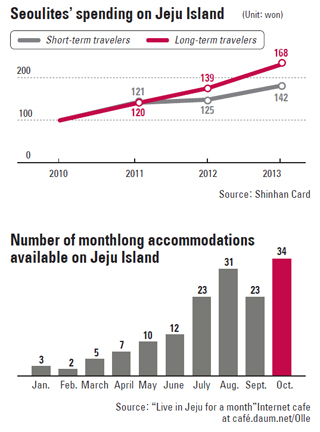 The western part of Jeju has more accommodation choices, so you have a higher chance of finding a good house, while the eastern part has many oreum, or tiny volcanic zones, and beautiful forests.

Some guesthouses are available for monthlong stays, but the safest way of securing a spot is by booking places like Lazy Mama, which are fully furnished with all the necessities like pots and cutlery.

But there are simply too many people who wish to stay in Jeju for a month, so it is always better to hurry to make a reservation at lodging that is optimized for a monthlong stay.

A short trip to Jeju before booking a place is highly recommended because some hook customers with fraudlently Photoshopped images.

Along with Lazy Mama, there are a few other places suitable for long-term travelers. Marchen House in Nohyung-dong is a studio-type accommodation while Sea and House in Oedo-dong is a small apartment.

Lazy Mama has four separate houses with a shared front yard. Reservations are only open to families with children under 13.

When contacting a landlord, be sure to check whether the monthly rent includes electricity bills and other utilities.

“If you plan to visit the island during winter, studios or apartments are better than independent houses,” said Lee, the owner of Lazy Mama. “If you wish to stay in a house with a front yard, choose one that is a bit distant from the sea. Otherwise, you will have to pay a lot of utility bills for heating.”

Since public transportation is not well developed in Jeju compared to Seoul and Gyeonggi, you will need to either rent a car or bring your own. The average rental fee for a compact is about 400,000 won per month, but rent is very high during peak season, between July and September.

The second option is to use a car delivery service, which costs between 300,000 won and 350,000 won. It takes two days to receive your vehicle.

Once you decide where to live and how to move around the island, the next thing to do is to plan the rest of your monthlong stay.

Families who have already spent a month on the island say the best plan is not to make any plan.

“A month is too short to plan something,” said Kwon the woman who headed to Jeju after quitting her job.

Jang, the mother who is in Jeju without her husband, said, “When I came here for the first time, I was busy making plans. But this time, we didn’t plan anything but we spontaneously decide things. I think this is the best way to enjoy Jeju.”