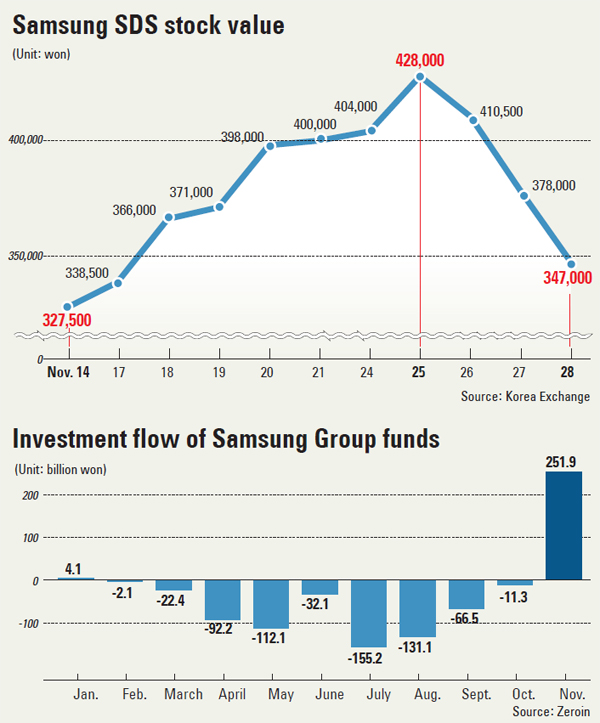 Samsung SDS, which successfully carried out one of the biggest IPOs in the country on Nov. 14, in the last three trading days until Friday saw its stock value shrink nearly 20 percent.

As a result, the company handed its position as the fourth largest by market capitalization on the benchmark Kopsi over to Korea Electric Power Corp.

However, market experts said the recent drop was a slight adjustment, because Samsung SDS’s stock was widely considered to have been overvalued. In fact, investors’ interest in Samsung Group is strong, with many flocking to Samsung funds.

According to Korea Exchange on Sunday, Samsung SDS ranked fifth on the Kospi with a market capitalization of 26.8 trillion won ($24.07 billion) as of Friday. 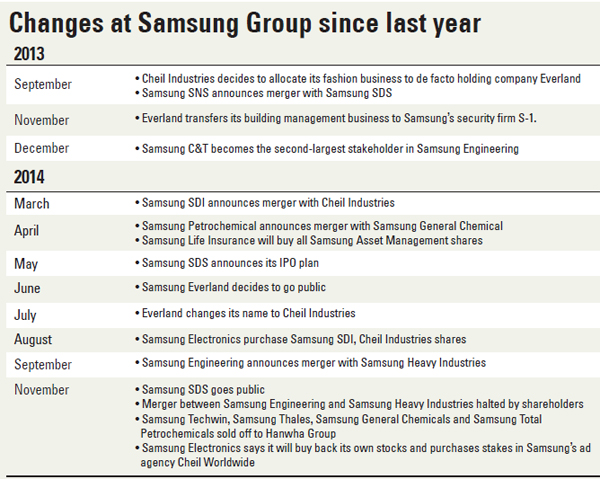 Since Samsung SDS went public in mid-November, it enjoyed steady upward momentum, with its stock value closing at twice the value of the initial offering price on the first day. Since then, the stock’s value rose by more than 30 percent to reach its highest point of 428,000 won on Tuesday.

The early success made Samsung SDS the fourth-placed company on the Kospi based on its market capitalization of 33 trillion won. Last month there was speculation that it could even outrank third-placed SK Hynix.

But on Wednesday the tide changed and investors began to offload their holdings. On Friday, Samsung SDS fell by more than 8 percent.

Although the stock value of Samsung SDS has declined, it doesn’t mean investors are less interested in Samsung shares.

According to Zeroin, a fund investment information provider, last month investments in Samsung Group stocks excluding exchange-traded funds amounted to 251.9 billion won, or 83 percent of the total of 301.1 billion won was injected into the local fund market.

This is a major turnaround from earlier this year, when Samsung affiliated stocks were losing investors.

Samsung Group funds were first listed on the Kospi by Korea Investment Management in 2004 and attracted huge amounts of investment. The dividends paid in 2011 exceeded 6 trillion won. However, due to the group’s poor performances, it started to shrink last year and today is down to 4.8 trillion won.

Other than in January when 4.1 billion won was put into Samsung Group funds, investors were withdrawing their investments this year up until November. Investors’ sudden heightened interest in Samsung last month was no only due to Samsung SDS’ IPO, but also because the group was making major internal changes. This included the decision to buy back more than 2 trillion won worth of its own stocks.

“Samsung Group funds that investors have been avoiding for quite some time have been getting interest since the IPO of Samsung SDS and with the upcoming IPO of Cheil Industries,” said Kim Hu-jung, a fund analyst at Yuanta Korea. “Additionally, the recent decision by Samsung Electronics to take stronger action in providing bigger returns for its investors including the buy back of its own stocks has been a positive contributor to Samsung shares.

“If the governance restructuring continues, there is a high possibility that Samsung Group funds will show strong growth.”

Samsung has not publicly acknowledge the succession of Samsung Electronics by Vice Chairman and heir apparent Jay Y. Lee. But evidence of the move can be seen in several surprising steps taken by the group this year: the recent buyback of Samsung Electronics’ stocks, the group’s decision to sell off its defense and chemical businesses, and the IPOs of the central affiliates.

The market’s biggest interest now is the year-end reshuffle of Samsung’s top executives that will likely be announced on Monday. There is already speculation over who will take a bigger role within the organization and who will be relieved of their duties.

There are even rumors as to whether or not Vice Chairman Lee will be promoted to the position of chairman.

Lee is playing a bigger role at the company, including orchestrating the sell off and increasing his own power within Samsung Group while weakening the influence of his sisters particularly Hotel Shilla CEO Lee Boo-jin. But many are betting that he will keep his current position because his father, who suffered a heart attack in May, is still recuperating.