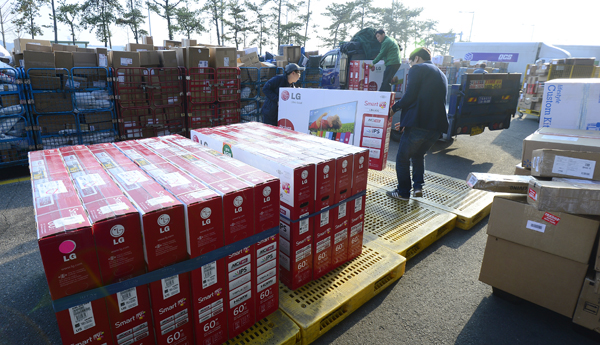 Since Thursday she’s been glued to her computer as everything from TVs to children’s toys are sold at bargain prices in celebration of the U.S. retailing phenomenon called Black Friday.

Park and a group of neighborhood friends search different Websites from fashion to electronics and exchange information on the prices through KakaoTalks well into the night.

“Why should I pay extra on the same product just because it’s sold at a local retail store?” asks Park. “Except for daily necessities, I purchase all of my daughter’s toys and clothing from overseas online shopping mall because it’s so much cheaper than going to discount stores like Lotte Mart or E-Mart.”

Park has taken a leave of absence from work to raise their three-year old daughter, so savings on buying goods from overseas online malls is a necessity.

Although Black Friday should be a unique shopping phenomenon for the United States - it follows Thanksgiving, the most American of holidays - Korean consumers are joining in because of the universality of online shopping.

Last year, news spread in Korea about the Black Friday sales, in which you can even buy Korean products like Samsung TVs at a steep discount. This coincided with the trend of more Korean consumers buying directly from overseas-based internet shopping sites.

There are growing speculations that this year purchases by Koreans on U.S. online shopping malls during Black Friday sales, which started on Thursday and continues through Monday, are likely to double over last year.

Roughly 40,000 goods were bought during Black Friday last year online. This year the figure is expected to exceed 80,000.

Direct purchases of goods from overseas online shopping mall until four years ago only amounted to 28 billion won ($25.2 million). This year that amount is expected to exceed 2 trillion won, up from 1.1 trillion won last year.

A report by KDB Bank estimates that this figure will likely grow to 8 trillion won in 2018.

A survey by Korean online shopping website GMarket made during the first 11 days of last month showed that 71 percent of 2,489 respondents said they were planning to buy products during Black Friday sales. What was more surprising was that 74 percent of those polled had no prior experience in buying products from overseas online shopping malls.

In case of luxury goods, local department stores charge 20 to 30 percent higher prices. And during Black Friday sales, luxury goods are often sold at half price.

On Amazon.com a 55-inch Samsung Electronics’ UHD TV is offered for $1,197.99. E-Mart’s Website offers a slightly upgraded version with a 13 percent discount to celebrate the Korean tech-company’s 45th anniversary. Even so, the TVs are offered at 2.7 million won ($2,400), which is almost twice as expensive as at Amazon.

An Elsa doll from Disney’s runaway hit “Frozen,” which has dethroned Barbie as the most sought after toy during this year’s Black Friday sales according to a survey by the U.S. National Retail Federation is much cheaper on Amazon.com. While the 16-inch Disney Animators’ Collection Elsa Doll retails from $39 on Amazon.com, the same doll retails between 70,000 won and 100,000 won in local retail stores.

One reason why local prices are high is high tariffs levied on consumer goods.

The market is still dominated by importers with exclusive rights who tend to gouge locals.

“The difference in consumer goods prices comes from a lack of openness in the consumer goods market and efforts by retailers to diversify the import channels,” said Kim Dae-jin, researcher at the Korea Development Bank.

But it’s not only price that drives Koreans to overseas online shopping malls.

Ms. Park said one of the perks of shopping at Amazon.com is how they treat customers.

She recently purchased a branded fashion item for her child from a Korean online shopping site that was one-tenth the normal price.

When she placed the order, the company called her up and told her the price was an error and the sale could not go through. It asked her to cancel the purchase, which she did with frustration.

But recently she was searching Amazon’s Website when a toy set grabbed her attention. She placed it in her online shopping cart to make a final decision about later. Through an honest mistake, the toy arrived at her front door. She sent an e-mail to Amazon.com saying she didn’t approve the purchase. Amazon.com admitted making a mistake and told her to keep the toy for free.

When she told the story to friends, they said they had heard similar tales in the past. Thus Amazon.com is now called among housewives “Daeinbae Amazon-si,” which translates as “Mr. Greathearted Amazon.”

Park said she had a similar experience with Ralph Lauren’s Polo, which gave her an extra discount on a T-shirt and told her to keep it because it was the company’s error.

Some housewives are now making direct purchases from China and Germany. Taobao is giving Amazon a run for its money because it offers cheaper prices.

In order to meet demand, Korea’s largest shipping agency Malltail has tripled the number of its distribution centers, extended its operation hours to 24 hours during the weekdays, extended workdays through weekends and chartered a plane.

To take advantage of consumer fervor, some of the shopping sites said they will expand their sale through Monday, which they are calling Cyber Monday.

Direct purchases are posing a direct threat to local retailers. Galleria Department Store’s Luxury Hall discounted 120 brands up to 90 percent under the slogan Black December Sale. As the economy remains tepid, domestic consumption has declined. “We felt an urgency that we might lose demand during the year-end period if we lose our customers on Black Friday,” said a store spokesman. Korean retailers have named December 12 the Korean Black Friday and promised that they will sell things cheaper than on overseas shopping sites. They are targeting consumers who feel nervous about the shipping.