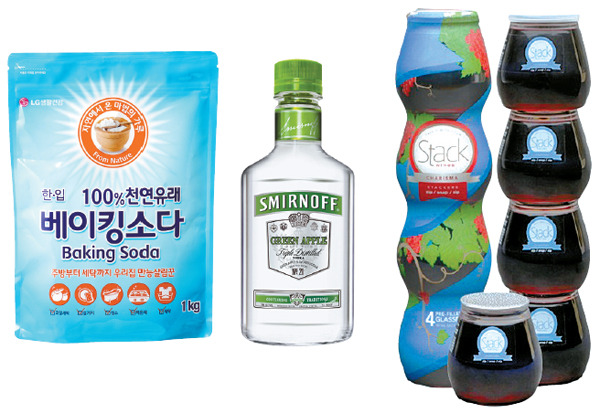 From right: LG Household & Care’s baking soda is used exclusively for cleaning; Smirnoff’s vodka in a plastic, pocket-sized container is lightweight and easy to carry; Stack Wine’s Carisma in plastic cups has changed the belief that wine should come in glass bottles. Provided by the companies

Wine in plastic bottles instead of glass, shampoo that doesn’t require water and cleaning products made from baking soda are just few of the products that have broken the traditional idea and are now gaining popularity among consumers.

Honey Butter Chips also fall into this category of innovation. Before the new flavor of chip went on sale, saltiness was what most consumers looked for in a potato chip. But now, consumers are craving the honey-sweetened snack.

“I’ve heard they’re good from people who have tasted them but it’s really hard to find them in any stores,” said Jeong, 40. “My husband and I now always go to the confectionary section when we’re at a discount store or convenience store just to see if they have it. I heard that at major discount stores only two bags per consumer are allowed and only one bag is allowed at convenience stores because they immediately run out when the Honey Butter Chips are in stock.”

According to Lotte Mart, Honey Butter Chips ranked 16th among about 70 potato chip products when they first came out in early September. But today the chip is No 1. Sales have quadrupled this month compared to sales in October.

Some companies are trying to break with tradition by repackaging their products.

In other countries, inexpensive wine is often packaged in plastic bags or boxes, but consumers in Korea have always associated wine with glass bottles.

But Lotte Mart has been trying to change that by selling wine in plastic containers and single servings that resemble juice boxes.

One brand of 1.5-liter red wine that comes in a plastic container is Les Hauts De Chamboustin. Despite its unusual appearance, it is currently the chain’s best-selling French wine, the company said.

A wine from online shop Winenara called Stack Wine that comes in a bowl shaped container the size of a glass of wine has also become popular for its plastic bottle.

Smirnoff’s 200-milliliter pocket-size vodka in a plastic bottle and Bonito’s Sangria, which comes in a small cardboard box are also receiving positive reviews from consumers because of their portability.

“Instead of a heavy glass, we have made some changes to the container to make it lighter,” said Nam Geun-woo, spokesman at Diageo Korea, which imports and retails Smirnoff.

A bottle of soju wrapped in a vinyl package created by Lotte Liquor has also grabbed consumers’ attention. According to the company, the idea for the new packaging came from an ice-cream packet with a similar design.

Some cosmetics companies are unveiling products for consumers who are just plain lazy or too tired.

Cosmetics giant AmorePacific is marketing a product called “deep cleansing water” which allows a person remove his or her makeup without having to go to the bathroom to turn on the faucet. The company is also seeing success with its waterless shampoo under the brand mise en scene.

LG Household & Care has a similar dry shampoo in the form of a powder that is squirted out of a spray bottle that it says has the same effect as hair washing with water.

“Products that either evolved or those that have diverted from something that is considered familiar are gaining wide popularity,” said Nam Chang-hee, product manager at Lotte Mart. “Although their applications are limited, products that have are convenient and affordable are changing trends in the market.”

Major retailer E-Mart is selling a product that is similar to a paper towel and a dish cloth. The cloth, which can be washed and used again, is one of the store’s best-selling cleaning products, bringing in an average of 100 million won in monthly sales.

Aekyung’s Granola Yogurt Meal, which has powdered yogurt instead of liquid, has changed quick meals. It is easy to transport and only takes water to turn the powder into a yogurt.

Baking soda, which is usually used for cooking, can also be used for house cleaning. Last year, the market for baking soda was worth 10 billion won, but in the first half of this year, the market expanded 170 percent over the same period last year.