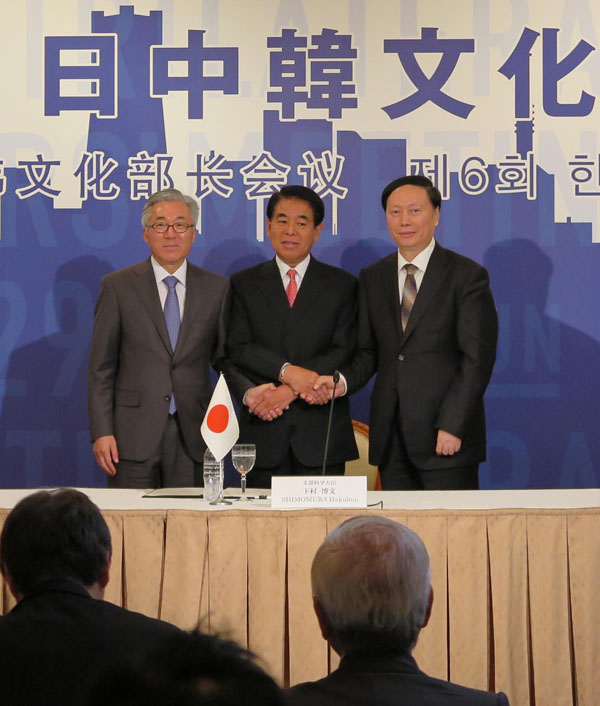 Korea proposed to Japan the setting up of a joint body to take charge of repatriation of cultural artifacts.

Minister of Culture, Sports and Tourism Kim Jong-deok made the suggestion to Hakubun Shimomura, the Japanese culture minister, at a meeting of culture ministers from Korea, Japan and China held in Yokohama between Nov. 29 and 30, Korea’s culture ministry announced Sunday.

Kim’s proposal was a response to Shimomura’s call for Korea to return Buddhist statues Korean thieves stole from Japanese temples in 2012.

The statues, which are of Korean origin, have reopened a decades-old conflict between the two Asian neighbors.

The Korean minister told his Japanese counterpart that the issue of returning the Buddhist statues should be dealt with based on Unesco’s regulations on artifacts that are illegally transferred, and the same goes for the 67,000 Korean articles kept in Japan.

“Japan’s side raised the issue of the Buddhist statues that Koreans stole from the temples in Tsushima, and the Korean side said there should also be a discussion of Korean artifacts that Japan took illegally,” Kim explained in an interview with Yonhap News Agency. “To resolve the issues, [Korea] suggested a joint cooperative institution.”

Shimomura did not make any response to Korea’s suggestion.

The three countries announced a so-called “Yokohama Joint Statement” to improve cultural exchanges. Under the agreement, Korea and China will set up a joint research institute for cultural industries and a joint fund for animation and other cultural areas. Korea and Japan, on the other hand, will seek to hold sports matches ahead of the 2018 Pyeongchang Winter Olympics and 2020 Tokyo Olympics.