Seoul is far friendlier to pedestrians than a couple of decades ago.

For 34 years, elections for local government heads were suppressed under military governments. But after they resumed in 1995, mayors of the capital city managed to expand central Seoul’s walkable areas by 91,591 square meters - about 22 acres - spelling an end to the “my car” era and opening the days to “walkable urbanism.”

Cho Soon, elected in 1995, set up the first department in charge of Seoul’s pedestrian environment. The next mayor, Goh Kun, established an auto-free zone in Jeong-dong. Lee Myung-bak built Cheonggye Stream, Seoul Square and Sungnyemun Gate Square during his mayorship.

It would be a stretch to say that Seoul is a pedestrians’ paradise. The city has several squares and auto-free zones in its central area, but they are not connected to one another. For example, people need to cross two roads to get to Cheonggye Stream from Gwanghwamun Square. 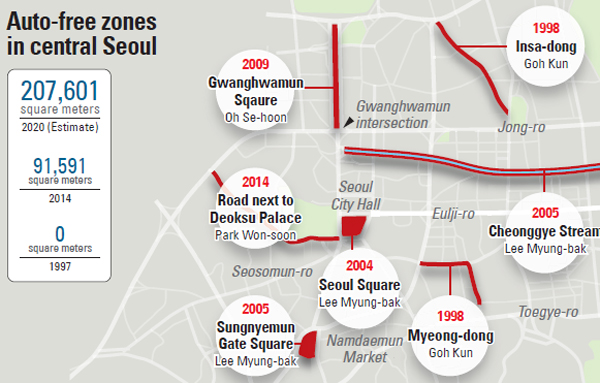 The Seoul government of Mayor Park Won-soon is working on turning the overpass next to Seoul Station into an elevated park like New York City’s High Line Park. That is just one part of Park’s plan to connect walkable areas. Park is also planning on narrowing some streets of central Seoul.

But his plan has its critics. Merchants in Namdaemun Market claim the elevated park will divert their customers, and Jogye Temple has officially expressed its concerns about worsening traffic. Analysts say expansion of walking areas should be a long-term vision as in other metropolitan cities in developed countries. They say the problems will never be fully ironed out by a succession of mayors.

“New York’s High Line Park, which used to be a deserted railway line, was initiated by citizens, not by the city’s leadership, and it took 10 years to complete its construction,” said Kim Eun-hee, head of the policy research center at Dosi Coalition, a walking-environment-related civic group. “The Seoul government should mull over how to reflect the various opinions of its people.”

One possible solution is designating auto-free streets. When New York City’s government decided that a dearth of walkable areas was a problem and announced that it would block busy Time Squares to make it an auto-free zone, the authority faced strong opposition. It persuaded people to give the idea a try by promising that it would reverse the decision if the result turned out bad.

But the city saw a 35 percent decrease in car accidents involving pedestrians. Also, five mega-size malls opened and rent in the area went up.

That is why experts say we need to abandon the stereotype that roads are only for cars.

Sejong-daero, the avenue that goes south from Gwanghwamun Gate, is about 100 meters (109 yards) wide, the widest space in the city. It is sometimes blocked for various events held not just by the city government but by many other organizations and companies.

“We should take the approach that roads are not owned by individuals or authorities, but are public zones that should be shared with others,” said Kim Ki-ho, a professor of urban planning and design at the University of Seoul. “Designating Insa-dong as an auto-free zone had strong opposition in the 1990s, but it has now become a commercial area with many visitors and tourists.”

“Expansion of walkable areas will also contribute to social equality,” said Lee Won-mok, head of the Pedestrian and Bicycle Division of the Seoul Metropolitan Government.