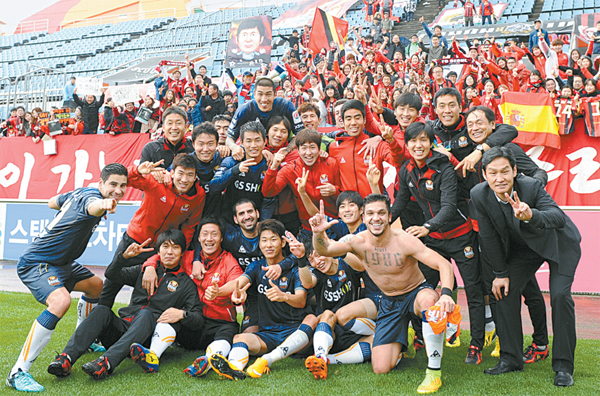 Players and staff of FC Seoul gather for a photo on Sunday after winning their last match of the season against Jeju United at the Jeju World Cup Stadium. Seoul qualified for the Asian Football Confederation Champions League by placing third in the K League.

FC Seoul had a tough time in the K League Classic this year but they closed the season on a high after a dramatic final match.

The club lingered in the lower half of the rankings until midway through the season, but managed to climb to third and on Sunday achieved its goal of advancing to next year’s Asian Football Confederation (AFC) Champions League.

Only the top three K League teams qualify for the AFC Champions League. The winner of the Football Association Cup also may join the Champions League, but Seoul lost that chance to underdog Seongnam FC in the final on Nov. 23.

To make it into the AFC Champions League, fourth-placed Seoul needed to win its last match of the season on Sunday against Jeju United at Jeju World Cup Stadium. But a goal from the home team’s forward Hwang Il-su in the 19th minute dimmed Seoul’s hopes.

Still, the team managed to level the match after a mid-range goal from Yoon Il-lok in the 69th.

FC Seoul desperately needed the win to come even in points with third-ranked Pohang Steelers, but the match was stuck at a draw up until the final few minutes.

As the clock ticked into the 89th minute, FC Seoul footballers were losing hope and even supporters fell silent. But then a miracle happened. Midfielder Osmar Barba Ibanez received a pass in the penalty box and netted the ball with an unstoppable shot.

Meanwhile, the Pohang Steelers were fighting to stay in third place, needing a win against Suwon in their last match of the season. Pohang’s Kim Gwang-Seok scored the first goal in the 48th minute, but Suwon reversed the match with a goal from the league’s top scorer Santos in the 79th and another from Jong Tae-se’s in the 84th to defeat the Steelers 2-1.

FC Seoul and Pohang both ended the season with 58 points, but FC Seoul came out ahead on goal difference.

“I have made mistakes that a manager shouldn’t have made and it led to a poor performance this season,” said FC Seoul Manager Choi Yong-soo after the match. “It was tough, but it was also time for me to mature.”

It was a great day for Choi, but it became a nightmare for Manager Hwang Sun-hong of the Pohang Steelers, which failed to make it to the AFC Champions League for the first time in four years.

“It is hard to accept the result,” Hwang said. “The players did their best. I’m the one who should be responsible for the loss, and I’m sorry that we couldn’t [advance to the Champions League].”