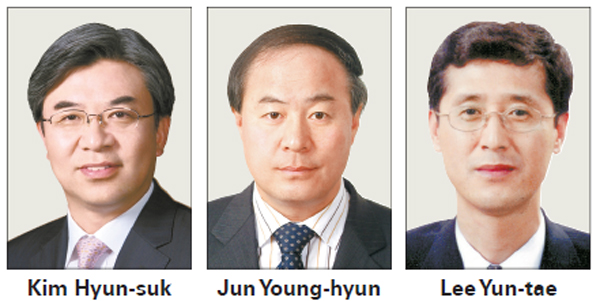 This is the first reshuffle that Samsung Electronics Vice Chairman and Samsung Group heir-apparent Jay Y. Lee took charge of because his father Lee Kun-hee is ailing.

In the past, the group’s end-of-year reshuffles usually affected around 16 top executives, but this time, the younger Lee wasn’t aiming for major changes.

However, he did carry on the group’s basic principle of “compensation follows performance.”

“This year, Samsung Electronics, as well as many other companies, had a performance struggle,” said Lee June, Samsung’s chief communications official. “Therefore, the size of the president-level reshuffling was reduced compared to a year earlier.”

Just like last year, there were no presidents promoted to vice chairmen. Some industry watchers anticipated a promotion for some members of the Lee family, but none were included in the list.

“Since the chairman is still bedridden, it is inappropriate to discuss the matter,” said Lee.

For this year-end reshuffle, the biggest question was whether Samsung Electronics co-CEO and president, J.K. Shin, who leads the company’s flagship IT and mobile communication (IM) division, would keep his job or not.

But while many speculated that Shin, who has been leading the IM division since 2010, could lose his job, Samsung decided to give him another chance to turn around the smartphone business, which is being squeezed by Apple in the high-end smartphone market and Chinese companies in the low.

“Shin contributed a lot in making Samsung Electronics reach the top in the mobile phone business,” said chief spokesman Lee. “We believe Shin will have many opportunities to make new strides in this changing environment.”

However, some presidents in the IM division weren’t so lucky. The division currently has seven presidents.

The group said that Lee Don-ju, president of strategic marketing for Samsung Electronics’ mobile business, will be replaced by Hong Won-pyo, who currently leads the company’s Media Solution Center, which develops mobile content. Kim Jae-kwon, the president who is in charge of the mobile business’s global operations, and Lee Chul-hwan, who is in charge of mobile R&D, are also to leave their posts.

Industry observers speculate that a change of three presidents in the IM division indicates that there could be some business restructuring within the division. Samsung said that a reorganization of businesses will be announced next week following the executive reshuffle.

Other division leaders in Samsung Electronics also managed to retain their jobs. Yoon Boo-keun, head of the consumer electronics (CE) unit, and Vice Chairman Kwon Oh-hyun, who heads the device solution (DS) arm in charge of the semiconductor business, will remain in their positions as they managed to maintain profitability despite a difficult environment.

Those who got promoted were also from the CE and DS divisions. Samsung Group said that Kim Hyun-suk, vice president of the visual display unit under the CE division, and Jun Young-hyun, executive vice president and general manager of the memory business in the DS division, were promoted to presidents.

Samsung Display Vice President Lee Yun-tae will serve as CEO of Samsung Electro-Mechanics from next year, replacing Choi Chi-joon, who has been leading the company for the last three years.

Among the seven presidents who got relocated, Kim Jae-youl, president of corporate planning at Samsung Engineering, will be working together with his wife Lee Seo-hyun, the second daughter of Lee Kun-hee and the head of the fashion arm of Cheil Industries.

Samsung Group said that Kim was named president of the sports business at Cheil Worldwide, where his wife also serves as president of strategic planning.

“We hope Kim’s professionalism in the sports industry and Cheil Worldwide’s know-how will produce synergy,” said a company official.

Cheil Worldwide, which is known for advertising and marketing consulting, has been running two professional sport teams: football’s Suwon Samsung Bluewings and basketball’s Seoul Samsung Thunders. Kim, 46, has been leading the Korea Skating Union since 2011.

Other role changes of CEOs include Samsung Asset Management CEO Yoon Yong-am, who will become the CEO of Samsung Securities next year.