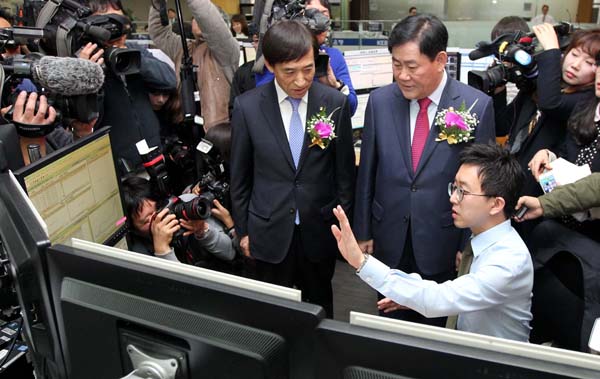 Direct trading between the Korean and Chinese currencies officially began on Monday in Seoul, marking the first achievement of issues agreed on by the leaders of the two countries in July.

Transactions were made via an electronic trading system developed by Seoul Money Brokerage Services and Korea Money Brokerage Corp., which were commissioned by the government.

Businesses and individuals can visit 12 commercial banks designated by the government as “market creators.” The minimum amount per trade set at 1 million yuan.

Businesses can expect to save about 3 percent by paying in the yuan, according to the Ministry of Strategy and Finance and the Bank of Korea.

“It is significant that the two countries have successfully established infrastructure to start trading within the year,” said Finance Minister Choi Kyung-hwan at an opening ceremony held at the KEB headquarters. “The government hopes Seoul becomes one of the top three yuan hubs along with Hong Kong and Singapore.”

The minister said that since he took office, the Korean government has significantly enhanced economic cooperation with China, including substantial agreement on a bilateral free trade pact.

“The won-yuan direct trading market will be utilized as a major growth engine for the Korean economy as it gives Korean businesses access to the Chinese market ahead of others,” Choi said.

To smooth transactions and step up the use of local currencies in trading between Korea and China, China’s Bank of Communications branch in Seoul launched clearinghouse services Nov. 6.

The Bank of Communications, designated by the People’s Bank of China, will be the primary channel for won-yuan transactions. The bank will have direct access to yuan from the Chinese government and supply liquidity at favorable rates to selected Korean commercial banks.

In the late 1990s, Korea and Japan opened a direct won-yen trade market, but it closed in less than four months.