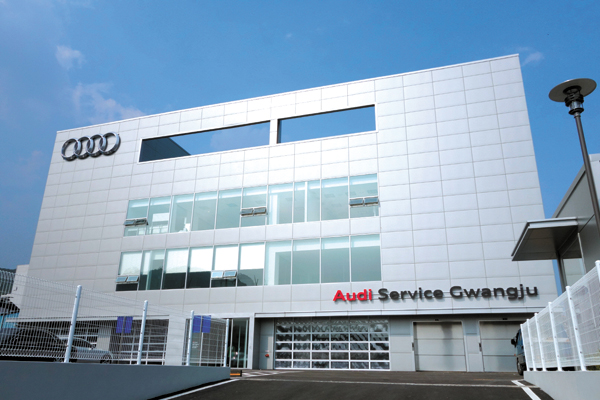 Imported automakers that have been criticized by Korean consumers for their poor customer service despite the high price of their vehicles have plans to improve next year.

Audi Korea said on Sunday that it will invest about 90 billion won ($80.5 million) next year in 16 additional service centers in the country to bring its total to 40.

Currently, Audi owners have to wait several days for simple services like an oil change to be completed, and more complicated repairs take even longer. Audio said in the addition of more centers, its goal is to make all of its services last one day.

Industry insiders said imported brands’ efforts to improve will lead to more intense competition with Korean automakers, which saw domestic sales decline this year. The market share of imports was 14.2 percent as of October, up from 12.3 percent in the same month last year.

“There have been many complaints about our customer service in the past few years and we hope our new centers can provide better quality,” said a spokesman for Audi Korea. The company said the new centers will be in Gangseo District in western Seoul, Busan, Daejeon, Pohang and Chuncheon, and that it will also expand its number of repair stations from 306 to 469. The new facilities will enable Audi to repair about 1,200 vehicles a day.

This year, Audi Korea spent 42 billion won to open four service centers in Cheonan, Cheongju, Suncheon and Gwangju. The Gwangju building opened in July on 3,209 square meters (34,541 square feet) of land. The company will open another center in Nonhyeon-dong in southern Seoul this month.

“We have been trying to improve our overall competitiveness including in technology and sales strategies, but we wanted to improve our customer service because it has been the weakest part,” said the spokesman.

Some import brands have other plans to improve customer service. Chrysler has repair shops called “express lanes” that carry out simple fixes such as oil changes or tire inspections in 30 minutes. Ford Korea has a “pick up and delivery” service to retrieve a broken vehicle and then return it to its owner after repairs.

“Foreign automakers have been focusing on sales to expand their market share in Korea in the last few years,” said Yoon Dae-sung, executive manager of the Korea Automobile Importers and Distributors Association (Kaida). “But since the market for them is predicted to mature in the next few years, their sales-focused business strategies will shift to customer satisfaction management.”

Kaida forecast that total sales of imported cars will be about 215,000 units next year, an increase of about 10 percent from this year’s estimate of 195,000.