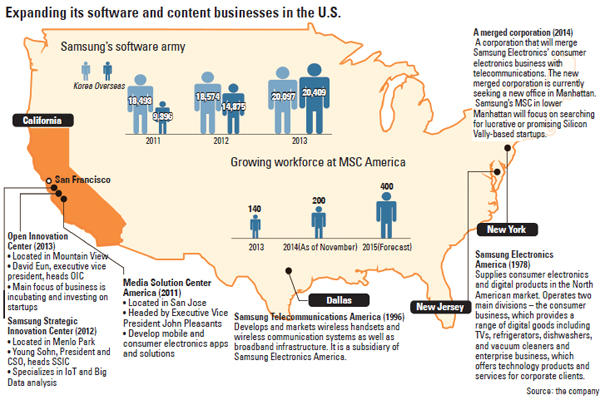 Samsung Electronics is reportedly shutting down its media center in Korea and assigning development of its services to the company’s operations in Silicon Valley and New York.

The Media Solution Center (MSC) has been responsible for the development and services of media-related content including video, music streaming services and e-books.

After suffering a major blow to its smartphone businesses in the third quarter of this year and with prospects for the businesses fading, Samsung has been trying to refocus to software and entertainment content development since the second half of this year, including Internet of Things (IoT) applications.

The Korean MSC is being closed just three years after it was launched in 2011. Content that was already being developed by MSC in Korea has been stopped or was in the process of being wound down.

That includes ChatOn, a messenger app created by Samsung. Samsung plans to end the service by the end of this year.

Its video streaming service (Samsung Video) and its e-books (Samsung Books) have all been cancelled. The work force stationed at the MSC department is expected to be fanned out to other departments.

Instead, Samsung plans to step up support of its overseas MSC operations and content development.

In March, MSC America, which is located in San Jose, California, recruited Disney Interactive Co-President John Pleasant to head its operations in hopes of strengthening research, development and marketing.

The employees working at MSC have grown from 140 last year to 200. Samsung plans to double the work force to 400 next year.

The company plans to provide a lot of independence to MSC America. Its music streaming service Milk Music, which reported an impressive performance of more than five million downloads in just nine months after its release, was the work of cloud start-up mSpot, which Samsung bought through MSC America in 2012.

“Although MSC America is a subsidiary, independent management will be guaranteed,” said an official at the Silicon Valley operation.

“The Korean headquarters’ influence will be limited to support like marketing.”

“Even major IT companies like Google and Amazon have recognized the importance of New York,” said a Samsung official.