New cultural space brings the arts to its audience

New cultural space brings the arts to its audience 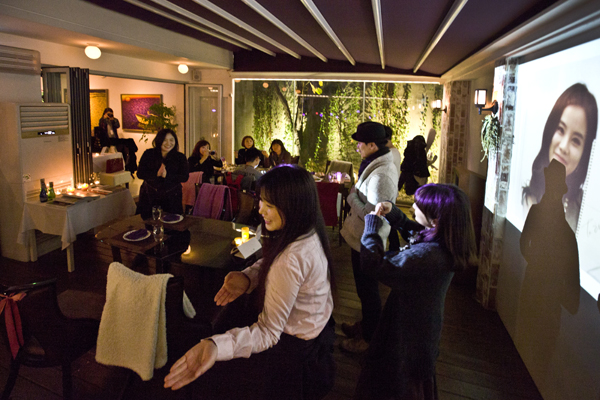 Musical actors and actress perform a flash mob musical on Friday at Lemuse, a cultural complex in Cheongdam-dong, which surprised patrons who were dining there. By Park Sang-moon

On Friday evening, a young couple dining at Lemuse, a quiet Italian restaurant in Cheongdam-dong, southern Seoul, suddenly got into a boisterous quarrel.

The argument was so intense that it caused some of the other patrons sitting nearby to turn around and stare.

The woman appeared to be yelling at her boyfriend for cheating on her when he abruptly stood up and broke into song. At first, the girlfriend looked pleased by his impromptu apology, but when he ended the song by calling out a different girl’s name, she became infuriated and screamed at him to “get out.”

But then, in a strange twist, she began singing as well.

When it became apparent that the whole brouhaha was part of a flash mob musical, the unsuspecting customers’ expressions softened, and the show continued as other actors and actresses joined in the performance.

“The show was really refreshing,” said Shim Yeong-sup, who came to the restaurant with his wife to enjoy a Friday night out. “I could really feel the energy from the performers because they are singing right beside you.”

According to Son Soo-yeon, who is in charge of brand management at Lemuse, patrons become immersed in the musical because they are literally on stage, too.

“Because most customers aren’t aware that they are in a musical show, they’re surprised at first but give us positive feedback after the show. Many have said that such an unfamiliar style of musical performance is very interesting,” Son said.

But Lemuse is more than just a restaurant with occasional surprise performances. It’s a complex cultural space, where customers can enjoy food, an exhibition and, yes, even a flash mob musical. The exhibition can be enjoyed from Monday to Saturday, but musical performances are only held on Friday and Saturday evenings. Shows typically last around 30 minutes so that they don’t interrupt diners.

The flash mob-style musical performance is relatively new and unfamiliar to Koreans, but “it’s a widespread genre in Western cultures.”

“It’s not the usual one-sided musical where the audience and the actors on stage are separated, but a show where the boundaries between them collapse so that the show becomes a part of them,” Son said. “It’s new and also allows more people to enjoy a musical in a less formal way.”

This was the case for Cha Soon-im, one of the customers at the restaurant on Friday.

“Because we are so used to colorful staging and showy costumes and heavy makeup, this type of musical where you don’t know who the customer is and who the actor is until one of them starts to sing could seem very strange at first,” she said. “I felt a little awkward at first because one of the actors began singing right in front of me, making eye contact. I could really hear his breath and feel his emotions. But it was a worthwhile experience.”

It would be great if “such a cultural genre becomes more widespread in Korea,” she added. “It lowers the barrier to entry the general public has when it comes to watching musicals.”

Five active bloggers were also invited last week to watch the musical at Lemuse, some of 10 current Lemuse “ambassadors” the space has recruited in an effort to spread the word about the venue’s events.

“I’m the mother of a young girl and it’s really difficult for us mothers to enjoy a cultural life,” said Lee Eun-kyung, a blogger who writes about food and performances. “So, a ‘complex cultural space’ like Lemuse is attractive because we can enjoy the food, but also the paintings and even a musical in one evening.”