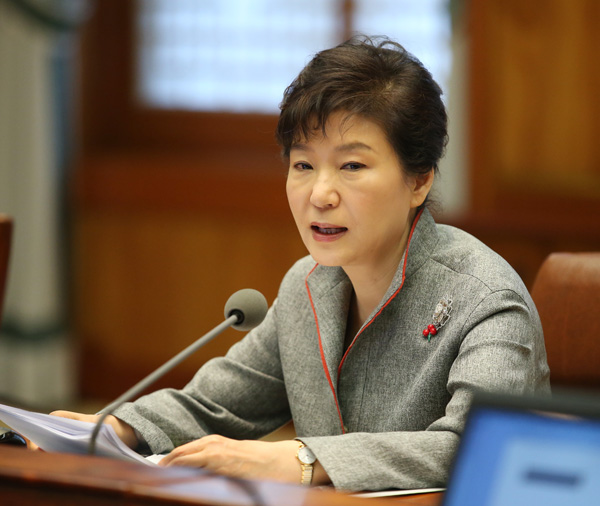 President Park Geun-hye branded the leak of an internal Blue House report as “an act breaching state affairs discipline,” in a meeting Monday with her senior secretaries.

After the president’s stern characterization, the prosecution vowed to upgrade the level of its investigation into the case, saying it was more serious than mere defamation.

The Seoul Central District Prosecutors’ Office also signaled it could go as far as to raid the Office of the Presidential Secretary for Civil Service Discipline, the origin of the document. Should the raid be carried out, it would be the first time in 15 years that the Blue House underwent such an extreme legal measure.

As an initial step in the investigation, prosecutors imposed a travel ban on the senior police officer identified by the surname Park, who wrote the report while temporarily working at the Office of the Presidential Secretary for Civil Service Discipline and allegedly took it away with him when he left the job in February.

The president was holding her first biweekly meeting with senior secretaries since her return from China, Myanmar and Australia. She focused on the leak of the internal document and described “such a corruption in public office discipline” as an “evil practice.”

“Something that can’t be happening and isn’t supposed to be happening happened recently,” she said. “Numerous rumors and various civil petitions as well as state affairs-related issues flow into the Blue House, but they do not necessarily reflect reality nor are they all true … If such things are leaked even when the most basic facts haven’t been checked, the country will plunge into mighty chaos and it will cause social conflict.”

The president’s remarks Monday come three days after the Segye Ilbo ran an exclusive report quoting an internal presidential office document that said Park’s former campaign manager, Chung Yoon-hoi, 59, was internally investigated for using his influence, including trying to get rid of Chief of Staff Kim Ki-choon, one of President Park’s most loyal aides.

The scandal seems to have ripped a veil from the fights over power among presidential loyalists, official and unofficial.

The president, who has managed to keep a hold on good approval ratings even as the country went through a major national tragedy - the April 16 sinking of the Sewol ferry - made an issue out of some media outlets that ran reports about the revelations.

“That [media] releases stories without trying to fact check matters that can easily be verified,” the president said. “Rattling the country with such groundless rumors should be in the distant past for this Republic of Korea, which is rounding the corner to become an advanced economy.”

The president said in a resolute tone that the issue should be “resolved as soon as possible so that all suspicions are cleared.”

She said the prosecution should find out who is stirring up confusion and why.

She also vowed to mete out punishment to anyone who indulged in inappropriate behavior - regardless of their position - and said those responsible for malicious slander should be held accountable.

The main opposition New Politics Alliance for Democracy, however, counterattacked the president by quoting from the leaked internal report.

“The Blue House report shows that Chung ordered [three presidential secretaries] to spread rumors that the president would sack Chief of Staff Kim Ki-choon,” said the party’s chief spokesman, Yoo Ki-hong, in a briefing. “What the report says actually happened in April.”

The police officer who wrote the report, surnamed Park, told reporters on his way to work at a local police station in Seoul on Monday morning that he never leaked the documents and will sincerely cooperate with the investigation by the prosecution.

Sources tell different stories about the allegation about Park. Some say he was seen bringing one or two boxes containing his personal belongings to a room inside the Seoul Metropolitan Police Agency two days before he was ordered to end his temporary duties at the Blue House.

Some sources say a couple of police officers took the documents in question from the boxes without Park knowing.

Other sources say he took photos of a computer monitor showing the internal report and gave them to reporters he was close to, while some Blue House officials say a different Blue House worker infiltrated the Office of the Presidential Secretary for Civil Service Discipline, copied the documents and leaked them.