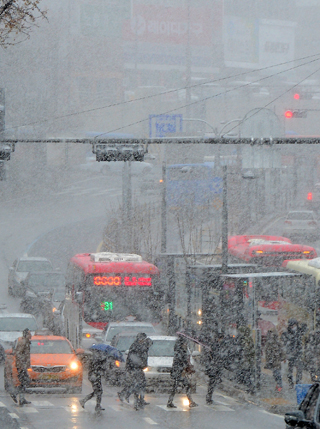 Pedestrians walk across Gwanghwamun Intersection on Monday in central Seoul. Snow fell nationwide Monday morning and was accompanied by strong winds throughout the day. Korea’s weather agency predicts the frigid temps will continue until Dec. 8. [NEWS1]

December arrived Monday with gale-force winds sweeping across the country and a few centimeters of snow blanketing the hardest-hit areas. The frigid climate, according to the local weather agency, is expected to worsen Tuesday and continue throughout the week until Dec. 8.

In Seoul, morning temperatures dropped far below zero, at minus 7 degrees Celsius (19 degrees Fahrenheit), and wind blew at a speed of 14 meters per second (31 miles per hour), putting the sensory temperature at minus 10 degrees Celsius. Snow sporadically fell starting at 8 a.m., but faded out entirely by midday to leave a buildup less than a centimeter (0.4 inch) high that quickly melted away.

A strong wind warning was issued across the country throughout most of the day despite the snow, affecting even Jeju Island, the country’s warmest region.

Snow is not forecast for Seoul on Tuesday, but temperatures will drop more than on Monday, to minus 10 degrees Celsius. The high Tuesday is expected to be around minus 1 degree Celsius.

Morning temperatures for Tuesday are likely to dip below zero degrees across the country, except on Jeju Island, weather officials said.

A spokesperson from KMA said the cold would continue through early next week, pointing toward the expansion of a cold continental anticyclone, in which large-scale winds flow across a region with high atmospheric pressure.

Over the weekend, daily temperatures will range between minus 6 degrees and 1 degree Celsius.