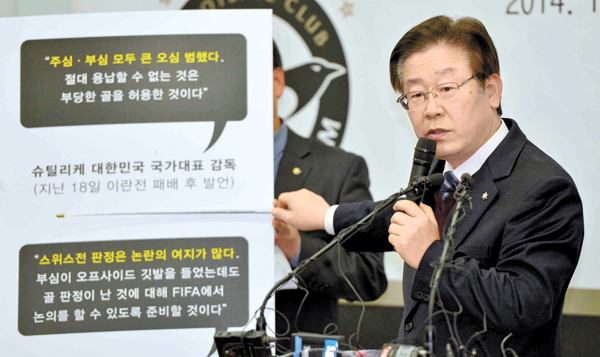 Seongnam Mayor Lee Jae-myung, who owns Seongnam FC, criticized the K League’s decision to refer him to the disciplinary committee, at Seongnam City Hall in Gyeonggi on Tuesday.

Lee claimed on his Twitter account on Friday that his team was nearly relegated to the second-tier K League Challenge due to bad calls by referees and that the unfair operation of the league is ruining sports in Korea.

The K League accused him of violating its rule, which states referees must not be questioned after a match, and decided to penalize him. It is the first time the K League has punished an owner of a professional football team.

Lee insisted on Tuesday that the K League’s decision is unfair because it did not punish Korea Football Association Honorary President Chung Mong-joon after he said he was not satisfied with the result of the 2006 Germany World Cup because of bad refereeing. The league also did not punish the national team manager, Uli Stielike, when he said he thought a goal scored on Korea last month in a friendly against Iran was the result of a bad call.