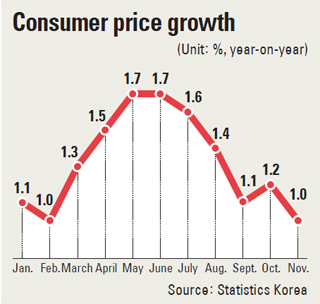 Concern about deflation is mounting as consumer prices grew at a nine-month low of 1 percent year-on-year in November, according to a report Tuesday by Statistics Korea.

Real inflation is far lower than the Bank of Korea’s target rate of 2.5 percent to 3.5 percent.

In November, lower prices for agricultural and petrochemical products were the main reason for the overall slow growth.

Prices of daily necessities inched up 0.7 percent, hovering below 1 percent for the past four months.

The finance ministry said, however, the consumer price growth trend is similar to that of previous years in that prices typically decline near the end of the year.

Finance Minister Choi Kyung-hwan and his economic team also seem to lack any sense of urgency with regard to low inflation.

Due to the 1 percent inflation rate continuing for nearly two years, the government reduced its meetings on inflation issues from 31 in 2012 to seven last year. This year, such meetings were held only twice, ahead of the Lunar New Year and Chuseok holidays.

But experts say the Korean economy is on the brink of falling into deflation and Japan’s so-called lost decade could become our story, too.

When Japan started to experience deflation, the country ignored it as if it were happening in another country, said Hong Sung-kuk, vice president of Daewoo Securities.