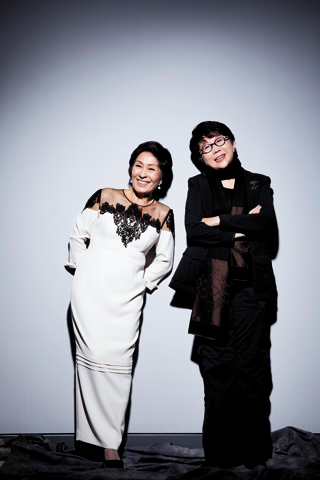 Veteran actress Kim Hye-ja and fashion designer Lee Kwang-hee are close friends. Lee designed clothes for Kim’s upcoming film “How to Steal a Dog,” which was directed by Kim Seong-ho. By Jeon Ho-seong

There was no better choice to dress veteran actress Kim Hye-ja, 74, as a rich widow for the upcoming movie “How to Steal a Dog” than fashion designer Lee Kwang-hee, 62.

Lee has made clothes for some of the richest members of Korean society, including former first ladies.

But the two women say they have a working relationship that goes deeper than usual, despite specializing in different fields. Kim and Lee both confessed that they are influenced by each other’s opinions - whether on career or life. They even insist they are soulmates.

Kim and Lee are both deeply involved in volunteer work with relief organizations. Kim has been a goodwill ambassador for World Vision Korea since 1991, while Lee established a nonprofit organization called Himango in 2011, which has planted about 30,000 mango trees in a small town in Tonj, South Sudan, and Himango Village in 2012 to educate South Sudanese and help them stand on their own feet.

Director Kim Seong-ho’s latest film, which is set to hit cinemas on Dec. 31, is about a girl who ends up living in a van after her father loses his job and attempts to steal a dog from a rich woman’s house in order to receive a reward for finding it. It is based on the novel of the same name by Barbara O’Connor.

Although Kim’s part is a supporting role, which required just 10 days of filming, her appearance made headlines because it marks her fourth time on the silver screen despite 45 years of acting. 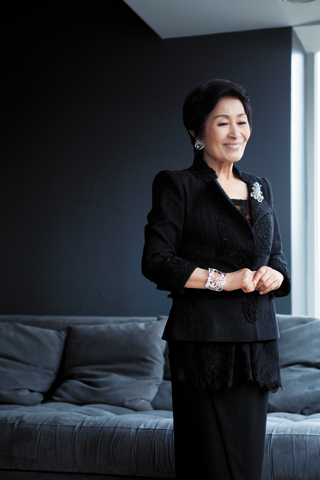 Kim wearing one of the outfits Lee made for the upcoming film “How to Steal a Dog,” which she has a supporting role in.

To hear more about Kim’s latest movie and her relationship with Lee, the JoongAng Sunday, an affiliate of the Korea JoongAng Daily, sat down with the two women for an interview. Here are some excerpts.


Q. What attracted you to this film?

A. Kim: My character is one that can be disliked by people; she’s very fussy and trusts nobody. But I wanted to be on her side. There must be reasons why she turned into who she is. There’s always a reason when somebody shuts his or her heart. She has no husband and even her son ran away from home after a quarrel. After hearing that her son has died, she immediately goes to find out if it’s true. Then she sees an abandoned dog and decides to bring it home.

There’s one line in the film that made me understand the character. When her niece constantly reproaches her, she says, “You know what makes dogs better than humans? They don’t talk.” The line expresses that this is a woman who has been hurt by what people have said.

I guess she has also affected others with her words. She is just like us ordinary people. We often think we are the only victims. Such depth is unlike characters found in other films in recent years.

You’re notoriously picky about taking on work - for example, director Bong Joon-ho spent four years trying to get you to agree to a role in his film “Mother.” What was the process of you settling on “How to Steal a Dog”?

Kim: About a year ago, I was doing the play “Oscar, Letter to God.” During that time, the director and people from the production company came to the show several times. I don’t know if they saw the play and decided to cast me or just saw the play to persuade me, but I noticed that there were a lot of similarities between both works.

First of all, children play the leading roles and the characters find hope despite being in difficult situations like poverty or death. I received the screenplay last November but delayed making the final decision several times. Although I was hesitant, I felt like I had to take part in this film.


Why did you hesitate?

Kim: The director told me I could play this character however I wanted, but I didn’t know how to. I always took roles playing ordinary people, so acting as a woman from the upper class seemed difficult to me. I wasn’t even sure if I knew how to act as a fussy woman. 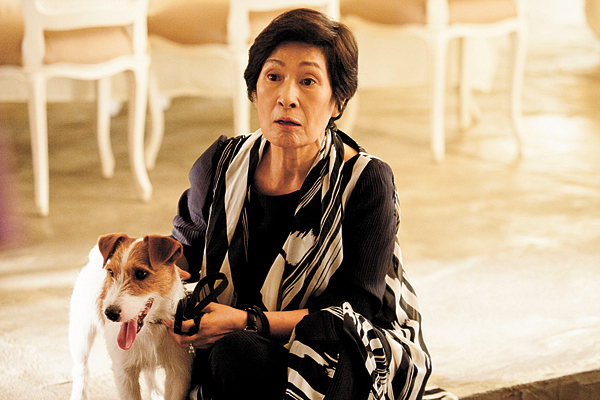 A still from the movie. Provided by All That Cinema

But Lee encouraged me and said she would support me by making clothes for the role. She even told me that sometimes when I look at others with a blank face, I can look quite cold and fussy.

She also gave me practical advice such as by describing to me how rich women in Korea act like.


You’ve finally gotten rid of your image as a mother.

Kim: No, my character in “How to Steal a Dog” is also a mother. She is hurt after having a dispute with her son. She’s a different type of mother, but she’s still a mother. I mean, who else would I act as if not a mother?

A lot of people also ask me why I have only appeared in four films so far in my career, but it’s for the same reason - because I’ve shown the public so many different types of mother characters through the small screen. I’ve wondered what else I could show.

I only took the roles in films when a mother character could be expressed differently. 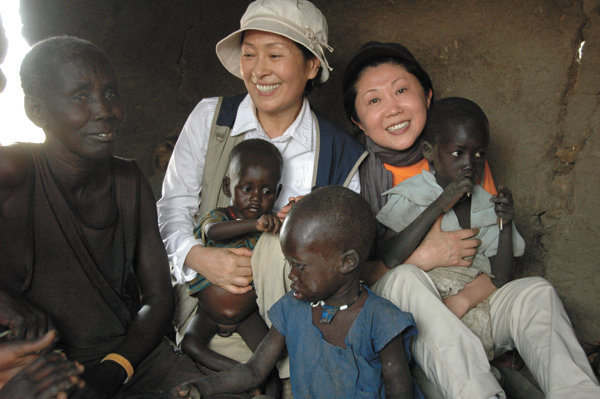 Kim and Lee together on a volunteer trip to South Sudan in 2009.

Do you think you are typecast as a mother because of your long-running role in the television drama “Jeonwon Ilgi?”

Kim: I learned everything a person should learn through that drama - even the laws of humanity. People say “Jeonwon Ilgi” is simply about people from the countryside.

Although the character is a country woman, there are monologues where she talks about her life after drinking a bottle of soju in a storeroom. On the day a landline was installed in her house, she also picks the phone up and “talks” to her dead mother. It’s a metaphysical story.

Because I played that character in the drama, I could do others like “Sand Castle” “Winter Fog” and “What Do Woman Want?” So far in my career, I’ve never experienced a role as a mother falling short.

Lee, you designed 11 outfits for Kim for this film. How did you interpret the character and create the clothes?

Lee: I talked to [Kim] a lot. I could empathize with the description of the character as seeming arrogant and cold-hearted, but with a warm heart deep inside.

Kim: The clothing really helped a lot in the film. When the character is grieving over her lost dog I got really immersed in her emotions because Lee made a dress that made her look old and powerless.

When the character has a scene where her back is reflected in a window, she designed the dress with emphasis on the back. She really put thought into the dresses.

Did you have any difficulties designing the clothes?

Lee: The difficult part was the fact that I heard about the film too soon so I had too much time to think [laughs].

The character is a widow and an old woman. To express someone gloomy like Kim’s character, the colors I could use were limited. The director mainly wanted black, so I had to find ways to express an elegant yet charismatic woman with that color.

It is difficult to portray details on black clothes on screen, so I had to hand stitch every single bead and ornaments. It took me about two months in total to create Kim’s clothes.

Do you have a favorite among the outfits you made?

Lee: They are all my favorites because I put all my effort into every one of them. I tried to make clothes that fit every scene in the movie. I think such a characteristic is very similar to Kim. We don’t really care about what others think. We are just satisfied when we feel like we’ve put all the energy we have into our work. If there is some leftover strength in us, we know that we didn’t do our best.

Kim: That’s true. After the work finishes, I have to be sick for few days. Otherwise, it proves that I didn’t do my best.

How did you two first meet? I heard it was just eight years ago.

Lee: Kim called me and asked if she could visit my shop.

Kim: I always ordered from a specific designer, a high school friend, but switched to Lee after realizing that we have so much in common. We have the same religion, similar habits and lifestyle.

Lee: At the time I got to know Kim, the situation in Africa was really bad. Kim told me that she would be going there with World Vision in a light aircraft and said that there was only one seat left. I decided to go with. I wanted to see what she does in Africa.

Kim: Maybe it wasn’t a coincidence. I asked her if she wanted to go on the trip with me but I delayed it several times. We were supposed to go in January or February, but we finally left in mid-March.

For a fashion designer, leaving work behind at peak time, which she said is around March, is not easy. But she still came. I was impressed to see her keep her promises.

What changed after the volunteer work?

Kim: I don’t think what we do is volunteer work. If you go there and see the children, no one can pretend there is nothing wrong. It’s not that they are asking you to give up all your possession.

I just felt like a sinner for living all those years without realizing what their situation was like. It’s not volunteer work but a duty. After the first trip, I was in such shock that I couldn’t really eat for a month or buy the stuff that I wanted to buy. I learn a lot from trips like this. When I go there, all the worries and concerns I had back in Seoul seem like garbage.

Lee: I also believe it should be the duty of those who are well off, rather than a volunteer service. One of the most important words in my life is “responsibility.”

I can’t neglect my responsibilities, both as a working woman and as a human being. That is why Kim and I work really hard at our careers. That way, people will pay more attention to the activities we take on in underdeveloped countries. sharon@joongang.co.kr