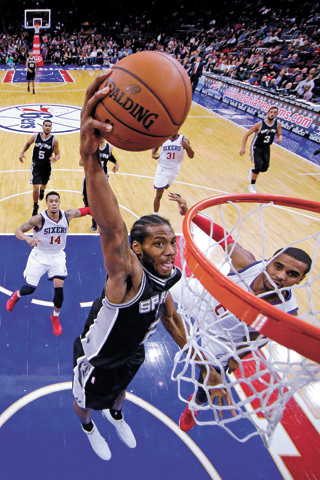 San Antonio Spurs’ Kawhi Leonard goes up for a shot during the second half of an NBA basketball game against the Philadelphia 76ers, Monday, in Philadelphia. San Antonio won 109-103. [AP/NEWSIS]

The Spurs didn’t have Tim Duncan or Tony Parker, and it gave Kawhi Leonard a chance to shine.

Leonard scored a game-high 26 points and had a crucial three-point play in the final minute to help the San Antonio Spurs defeat the winless 76ers 109-103, extending Philadelphia’s franchise-worst losing streak to start the season to 0-17.

“I try to assert myself every night, but tonight there were a lot of shots to shoot,” Leonard said.

The Spurs (13-4) played without stars Duncan (rest) and Parker (shoulder). Even without the duo’s more than 31 points, San Antonio had little trouble dispatching Philadelphia. Aron Baynes scored 15 points and Manu Ginobili and Cory Joseph each added 14 for San Antonio, which won its eighth straight. Leonard also had 10 rebounds while tying a career high in points.

Leonard scored 20-plus points for the fourth time this season after doing it three times all of last season.

“We’re trying to loosen up a bit and give him more of a green light,” San Antonio Coach Gregg Popovich said.

Michael Carter-Williams had 24 points and 11 rebounds and Alexey Shved chipped in 19 points for Philadelphia.

The 76ers also were short-handed, as leading scorer Tony Wroten missed his second straight game and rookie first-round pick Nerlens Noel sat out after getting injured in Sunday’s practice.

Philadelphia Coach Brett Brown was surprised that Noel, who is day to day, pulled himself out after warming up.

“It kind of surprised me he didn’t play,” Brown said. “I think the lesson is everybody in the NBA is injured.”

Philadelphia made a late run at the Spurs, pulling within 101-96 with 1 minute, 33 seconds remaining on Henry Sims’ layup. But Leonard put the game away by converting a three-point play to make it 104-96 with 42.7 left.

“He has the potential to do that often,” Ginobili said of Leonard. “Maybe on a different team he’d be putting up higher numbers. We play in a system and we take what the game gives us.”

The 76ers were competitive in their last three losses, losing by an average of 8.3 points per game to Portland, Brooklyn and Dallas, during this four-game homestand. They fell behind big early before battling back late.

“The first half was not played with much energy,” Brown said. “I’ve seen it with our guys. We play the Spurs, we’re sort of starstruck for a second. We had no juice, no energy.”

Meanwhile in Salt Lake City, Ty Lawson had 15 points and made a double-pump jumper to beat the shot clock with 29.6 seconds left that boosted Denver over Utah.

The game heated up after Arron Afflalo was ejected and the Jazz stormed back from a 22-point deficit to tie the game in the final minutes.

Lawson, who also had 12 assists, made the game-winner from the left wing between two Jazz defenders.

Gordon Hayward was blocked and Trey Burke missed a potential go-ahead 3-pointer on the other end before Darrell Arthur clinched the game with two free throws with 4.2 seconds remaining. Alec Burks’ dunk at the buzzer completed the scoring.

Wilson Chandler scored 10, Afflalo had 14 and Arthur added 12 for the Nuggets, who have won eight of their last 10 games.