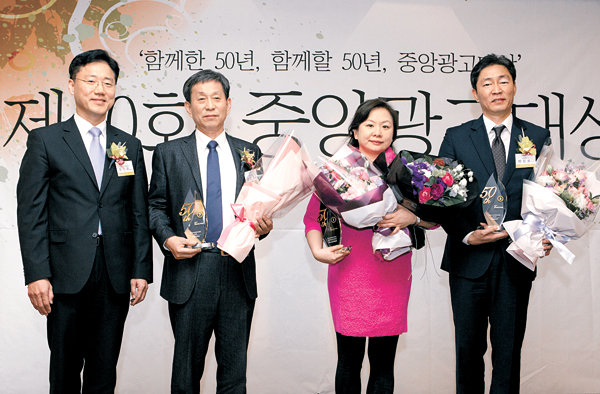 The 50th JoongAng Advertising Awards were held on Tuesday at the Westin Chosun Hotel in central Seoul to recognize excellence in print advertising in the Korea JoongAng Daily, JoongAng Ilbo and JoongAng Sunday.

More than 100 professionals in print advertising and public relations, including agencies and their corporate clients, attended the ceremony.

To commemorate the 50th anniversary, a category was created to recognize the company that had received the most prizes over the past 50 years, which Samsung Group won with 11 accumulated awards.

A total of 21 awards were handed out, including three for advertising in the Korea JoongAng Daily.

A representative of KB Financial Group at the ceremony said that the group focused on friendliness in its print ads.

“We’d like to emphasize a friendly image,” said Park Sang-yong, head of the communication department at the financial group.

He also said that KB chose to advertise in an English-language newspaper to help with its expansion overseas.

“KB Financial Group aims to become a major financial group in Asia,” he said. “So it is important for KB to have our name exposed to people outside of Korea as well.”

One chief judge of the awards said that the winners were chosen in an impartial manner.

“I feel really grateful for the JoongAng because it has allowed us to remain objective while we judge the winning teams,” said Lee Myoung-chun, a professor of advertising and public relations at Chung-Ang University who has led the panel of judges for 10 years.

“I would like to shed light on the 50-year history of the awards,” he added.

“The paths that [the awards] have taken go hand in hand with the development of advertising in Korea. I believe that these awards continue to support constant progress in Korea’s advertising.”