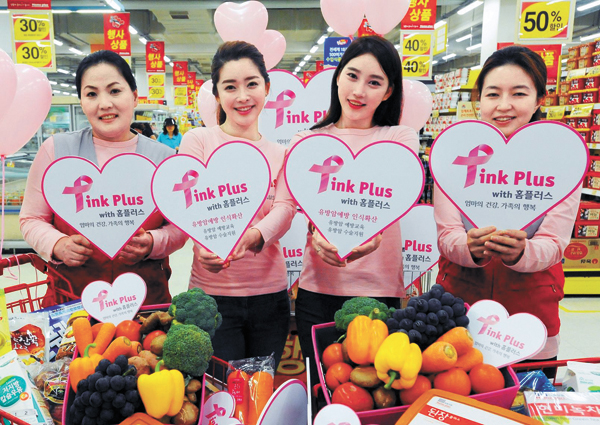 Homeplus believes that sustainable growth depends on women. Its customers consist of women between the ages of 30 to 50, and more than 65 percent of their employees are women. That is why the company joined a campaign called Pink Plus in October - along with the Ministry of Gender Equality and Family, National Cancer Center, Korea Breast Cancer Society and Korean Cancer Society - to boost awareness of breast cancer and support patients.

According to data from the World Health Organization, breast cancer is one of the most common cancers among women worldwide, but its mortality rate can be reduced if it’s detected early. In 2010, there were 16,398 patients of breast cancer in Korea, which is four times higher than in 1996. According to the Korean Breast Cancer Society, breast cancer is 15 percent of all cancers related to women.

Because more than 90 percent of breast cancer patients can fully recover with early detection, more awareness about the disease is crucial to save lives. Also, the patients need support, as their quality of life greatly drops after the treatment. Most patients are treated with surgery followed by chemotherapy or radiation therapy, which results in deformation of the body, hair loss and skin changes. Breast cancer patients have three to four times higher divorce rates compared to male patients. This means many have to take care of themselves while taking charge of the household, which leads to financial difficulty in addition to their physical and psychological pain.

Considering the needs of the patients, Homeplus is determined to help fight breast cancer in three ways: by raising awareness of the disease, providing education for its prevention, and giving financial aid for cancer treatments.

The very first move the company made in October related to the issue was to offer discounts on 40 products that might help prevent breast cancer. Such products included food like tomatoes, shiitake mushrooms, broccoli, cabbage, walnuts and natto or fitness equipment such as gym balls or hula hoops. Customers who bought the products also received points on their family cards that were 40 times higher.

Homeplus will also support breast cancer research at the National Cancer Center and Korean Breast Cancer Society. Also, it will establish associations with major hospitals to provide free check-ups. Additionally, the education centers in its chain stores will provide Pink Plus lectures, which will teach essential information about breast cancer such as prevention massages, exercises and dietary treatments.

It will also offer financial aid to breast cancer patients from low-income families in conjunction with the National Cancer Center. The recipients will be selected regarding their financial and medical condition. The company will offer psychotherapy to patients who are undergoing treatment or those who have been cured.

“Even though breast cancer has a high survival rate, many women, especially in their 30s to 50s, which is the prime of their career and family life, suffer from the disease because of a lack of awareness and prevention,” said Do Sung-hwan, the CEO of Homeplus. “We will cooperate with various institutes to reduce such pain in our society.”