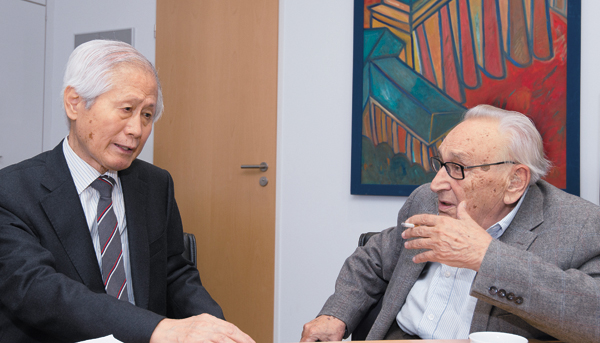 Egon Bahr, the creator of Ostpolitik, explains to Kim Young-hie, a senior columnist for the JoongAng Ilbo, his experiences with German reunification. By Hong Young-jin

Egon Bahr is the point of origin for German reunification. He created Ostpolitik (new Eastern policy) in 1957 and proposed its key concept, “change through rapprochement,” in a 1963 speech.

U.S. President Richard Nixon even called him Willy Brandt’s Henry Kissinger, the American diplomat who led U.S. foreign policy in the 1970s and who championed realpolitik.

Ostpolitik, designed by Bahr, laid the foundation for German reunification and rewrote the history of Germany, Europe and the world.

The former journalist and politician sat down for an interview with the JoongAng Ilbo on Nov. 12, just days after Berlin celebrated the 25th anniversary of the fall of the Berlin Wall.

The interview took place at his office on the fourth floor of the Social Democratic Party in Berlin. Bahr shared his experiences regarding German reunification and his insights on the reunification of the two Koreas with Kim Young-hie, a senior columnist for the JoongAng Ilbo. The interview was emotional, as it had taken a decade to plan.

A. I first introduced the concept at the Evangelical Academy in Tutzing in 1963. The first subject of change was the relations between East and West Germany and the second was the situation in Berlin.

We started with admitting to the fact that no one would remove the Berlin Wall for us. For the residents of West Germany to visit their families in East Berlin for just a few hours, a negotiation with the East German authority was necessary - and to do so, approval from the United States, the Soviet Union, England and France, which occupied Berlin at the time, was necessary. The Soviet Union agreed to it readily because the 40,000 residents of East Berlin who used to work in West Berlin had lost their jobs due to the wall, which was erected in 1961, and the mood in East Berlin did not appear calm. We accepted that the wall existed in Berlin.

As we go back to Mr. Kim’s question, the idea of “change through rapprochement” was to change East and West Berlin, East and West Germany, and then East-West relations. Because it was an ambiguous term, it could actually apply to a wide range of issues, from the Berlin issue to international relations.

Was the idea to stabilize relations between East and West Germany by admitting to the status quo and then thinking about reunification of the two sides?

Yes it was. When I negotiated with the Soviet Union’s Foreign Minister [Andrei] Gromyko in 1970 in Moscow, he said, “Nothing will be agreed to unless we agree to East-West boundaries. All the borders in Europe can only be changed through mutual pacts.” This principle of keeping the status quo succeeded in the Helsinki process.

So Ostpolitik was not a reunification policy, but a policy to ease tensions with a precondition to keep the status quo?

Yes it was. We didn’t even negotiate for reunification. We only wanted to improve relations between East and West Germany and relations between West Germany and the Soviet Union. Reunification was the ultimate goal, and easing tensions was the process and method for reunification. At the time, neither East Germany nor West Germany had sovereignty. The four victorious great powers exercised sovereignty over Germany. In the government statement that Willy Brandt announced in 1969 for the first time as a chancellor, he made clear that East Germany would be recognized as a country and that the four victorious great powers’ sovereignty over Germany would be respected. By doing so, a pathway to negotiate with the Soviet Union was opened.

Let’s talk about the Korean Peninsula. As opposed to Germany, in which only the Soviet Union had the decisive voice, neither the United States nor China have the dominant voice over the Korean Peninsula. The same goes for Russia and Japan. North Korea is the sole negotiating partner, but the North, just like East Germany, is opposed to reunification.

Theoretically, the North is the sole partner in the negotiation, but without the participation of the United States, China and Russia, and maybe Japan, Korean reunification is not possible.

Dr. Bahr, you wrote in your 2013 publication “Memories of Willy Brandt” that it was fortunate that Germany was saved from the tragedy of permanent separation, unlike Korea. Are you really so pessimistic about Korean reunification?

I am saying that, for now, it won’t be easy.

I have an important question concerning preparations for Korean reunification. How the government of a unified Germany dealt with senior officials from the East German party, military, secret police and government is a very important lesson for both Koreas. When Korean reunification nears, the political elites in North Korea will fiercely resist because they fear punishment and losing their privileges. They won’t be considering the future of Korea and its people. The North Korean military even has nuclear arms and missiles. How did the government of a unified Germany handle the political elites from East Germany?

They were not handled with much consistency.

For example, Erich Honecker, the general secretary of the Socialist Unity Party, went to Moscow and then Chile, and died there. Erich Mielke, the former head of the Stasi, served two years in prison, but that was punishment for the murder he committed in the 1930s, not for his role in the Stasi. Another leader of the Stasi, Markus Wolf, served a brief prison term and was then released. The political elites from East Germany were all dealt with differently.

(Bahr, who has spoken favorably of Honecker since he served as general secretary of the Socialist Unity Party, appeared to express some regret in those remarks.)

Are you saying that there were after-effects?

Twenty-five years ago, we declared that we were one people, but the distinction between Ossi and Wessi [East and West] has not disappeared. Internal integration has not yet been completed. I think that’s because the understanding, shared by Willy Brandt and Helmut Kohl 25 years ago, has been ignored.

Kohl, in his first statement as chancellor of the unified Germany, said the next goal for Germans is achieving internal integration. Internal integration is only possible through reconciliation. But the government of a unified Germany did not deal with the wrongs of the entire East German dictatorship, but rather focused its efforts on restitutions and restoring honor for individuals. It went after the wrongdoings committed by the Stasi. It gave the impression that everything had gone wrong because of the Stasi, not the dictatorship by the Socialist Unity Party, although the Stasi was nothing but a mere tool. I hope Korea will not repeat Germany’s mistake.

You have advised that we must reconcile with “wert” (value). Are you taking about human rights?

No. What I mean is reconciliation between the two divided countries. You must not calculate who committed more wrongs. You must put value on integration.

About integration: You have said integration can be achieved when the older generation disappears and the new generation appears. Are you saying that integration after reunification should be left alone by law of nature?

You have said small measures, not the big concept, are more important for unification. But Ostpolitik, as far as I understand, consisted of contact and dialogues between the two governments, and it had nothing to do with small practices or the grass-roots effort.

That is not true. We started with small steps. The representative case was succeeding in the issuance of travel permits between East and West Berlin. By doing so, we opened up the gate to get through the wall, although we were not able to pull down the wall itself.

For the historic mission of unification, do we need great politicians like Konrad Adenauer, Willy Brandt and Helmut Kohl?

Here is one thing I want to point out first. Reunification is difficult. It is not easy to reunite the two divided countries. And the system for a reunified country is a new regime. And that’s why it is important. The new system for Korea will include the United States, China, Russia and perhaps Japan. But I don’t see the principle for a new order. You will need many leaders who are capable of fully understanding the new system.

It sounds like “Wiedervereinigung” and “Einheit” are different. In English, that will be the difference between reunification and integration. How are the two different conceptually?

South Korea alone cannot achieve reunification. Preparation for integration can be done by the South alone or together with the North.

(This insight from Bahr has a strong implication for us. In other words, he is saying that South Korea, alone, cannot achieve political and physical reunification. A reunified Korea will be a new system that is more than a physically unified South and North Korea. Reunification is something the South will achieve with the North, with participation from the four major superpowers. Integration is the concept of restoring the Korean people’s homogeneity, and it is a precondition for political integration. At the same time, the progress of reunification that will continue even after the reunification itself.)

You are 92 years old, but you are actively working despite your age. What is the secret to your outstanding health?

Good genes, my wife’s great support and my never-ending curiosity.