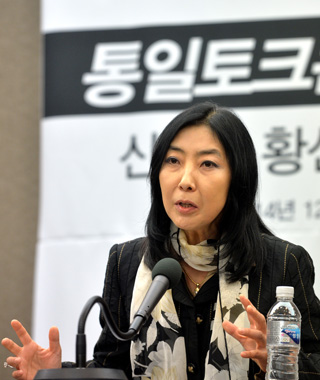 Korean-American Shin Eun-mi, 53, holds a press conference Tuesday in central Seoul, where she lashed out at conservative media outlets. [NEWSIS]

Two women who have come under fire in recent weeks for their alleged sympathies toward Pyongyang lashed out at conservative local media outlets for describing their activities as pro-North Korea and warned that they would send letters to international organizations to call attention to freedom of expression violations in South Korea.

Hwang Sun, the former deputy spokeswoman of the now-defunct Democratic Labor Party, and Shin Eun-mi, a 53-year-old Korean-American, were thrust into the media spotlight after local news organizations uncovered a video clip posted online of a talk show the two women hosted in November.

During the event, entitled “Unification Talk Concert,” the pair supposedly made remarks that painted the North Korean regime in a positive light, while failing to address the Communist country’s dire human rights record.

The two women have strongly denied the allegations waged against them.

“How can my remark that people in North Korea expect a positive change with a new leader be interpreted as praising and supporting North Korea?” Hwang said before reporters on Tuesday during a conference at the Press Foundation in central Seoul.

The two women claimed the media’s recent scrutiny of their remarks is tantamount to a violation of the freedom of expression granted by Korea’s Constitution and said they would send letters to global entities, such as United Nations Human Rights Committee, to address the encroachment of vested rights in South Korea.

The two women also questioned why they were being targeted for their remarks while civic groups behind the leaflet campaigns against the Communist regime have been permitted to continue their activities, which have been allowed based on freedom of expression rights.

“We invite all media outlets including television stations and newspapers as well as government officials to our talk shows so they can see our genuine wish [for unification],” Hwang and Shin said in a joint statement.

The press conference Tuesday came a day after Hwang filed a defamation complaint against the conservative Chosun Ilbo and TV Chosun, the newspaper’s broadcast arm, and its journalists, whom the pair claimed falsely depicted their activities.

But despite their denials, Hwang’s past remarks, made during an Internet talk show conducted and uploaded online, have only added to doubts about her allegiance to South Korea.

In one talk show, aired online in December 2011, Hwang wore a black to commemorate the death of Kim Jong-il, noting that she wore the outfit to pay respects to the late leader because she could not attend his funeral in Pyongyang.

Hwang first attracted public attention when she gave birth in the North Korean capital during a visit there.

She underwent a caesarean in Pyongyang on Oct. 10, 2005, the anniversary of the founding of the country’s Workers’ Party, leading some to wonder whether she had intentionally chosen the date.

Shin, a U.S. citizen, is the author of “Korean-American Ajumma Goes to North Korea,” which chronicles her times in the country over her six visits there.

The Justice Ministry is currently considering banning her entry into South Korea due to the accusations leveled against her.