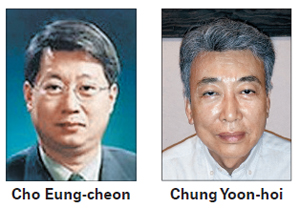 The juicy political scandal surrounding Chung Yoon-hoi, the shadowy former chief of staff to President Park Geun-hye, has spiraled into a new phase after a local daily ran an exclusive interview on Tuesday with a former Blue House secretary who shot down what Chung and three loyal presidential secretaries have claimed so far.

Cho Eung-cheon, former secretary for civil service discipline under the Civil Affairs Office at the Blue House, disclosed to the Chosun Ilbo that Chung maintained contact until April with Lee Jae-man, one of the three presidential secretaries mentioned in the leaked internal Blue House report produced on Jan. 6 looking into Chung’s behind-the-scenes influence on state affairs.

Cho’s story contradicted Chung’s claim that he severed all contact with people working with the president for the past 10 years and Lee’s testimony during a parliamentary inspection in July that the last time he met with Chung was in 2003 or 2004.

Cho, a former prosecutor and lawyer who entered politics in 2011 after Park’s presidential campaign recruited him, also claimed in the interview that he was forced to quit his Blue House job on April 15 in possible retaliation for his refusal to accept phone calls from Chung, who probably knew about the internal Blue House report detailing his activities.

“I tried to sincerely fulfil my duty as a Blue House watchdog for President Park but was severely constrained,” he told the newspaper. “But I can’t flatly say the wirepuller was Chung.”

Also on Tuesday, Chung claimed in an interview with the JoongAng Ilbo - a follow-up to an interview run on Monday - that someone is using the Presidential Office of Civil Affairs to distort facts about him by leaking the internal report.

The 59-year-old Chung, who ran Park’s failed presidential campaign in 2007, threatened that he won’t tolerate such games any longer. A day earlier he told the JoongAng Ilbo he was willing to go to jail if any wrongdoing by him was found.

“I intentionally transformed myself into a hunting dog so as to not harm the president,” he said. “But I have now determined to become a Jindo Gae.” (A Jindo Gae is a native Korean dog originating from Jindo Island known for intelligence, strength and agility.)

The two reports seemed to confirm long-standing allegations that political heavyweights have been secretly waging a power struggle on the strength of their ties to the president.

The Blue House said on Tuesday that what Cho and Chung told the papers is correct but stressed that there has been no “physical meeting” between Chung and Lee.

Presidential spokesman Min Kyung-wook told correspondents in a briefing that Chung called Cho to complain about conducting an internal investigation without his consent into the allegation that he once hired someone to shadow President Park’s younger brother Park Ji-man. Chung filed a suit against a weekly magazine that reported that allegation, which he claims is false.

After Cho avoided his phone call, Chung called Lee, the current secretary for administrative affairs, to deliver the same message, according to the presidential spokesman. Min also said that Cho is desired to cooperate with the prosecution “to reveal the truth instead of making a unilateral argument through a media outlet.”

“Interviews being released [about the scandal] are arguments from people facing investigations in the near future,” he said. “Wouldn’t every word from them need scrutiny?”

The spokesman promised the full truth will come out in the course of investigations and presidential staff members will cooperate with the prosecution’s probe.

The article, quoting the report, said that an internal investigation revealed that Chung was collecting information and had discussed state affairs, including the possible retirement of Kim Ki-choon, the president’s chief of staff, through meetings twice a month with 10 Blue House officials and related figures, including the three secretaries the report referred to as the “three doorknobs.”

Park Gwan-cheon, a former official at the Office for Civil Service Discipline under Cho, is suspected by the Blue House and prosecutors to have leaked the internal report. He has admitted to writing the report but denied that he has leaked it.

The senior police officer, who ended temporary secondment at the Blue House in February, was seen commuting to his job at a local police station Monday morning but went home after two hours. He said he was going on a two-day vacation.

The Seoul Metropolitan Police Agency told reporters that Park was granted days off because a herd of reporters descended on his office and it could affect other workers. The Seoul Central District Prosecutors’ Office imposed a travel ban on him on Monday but he has yet been questioned.