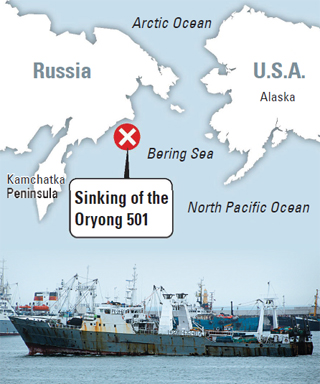 The prospect of saving 52 missing people from the Korean trawler Oryong 501 after it sank Monday appeared low Tuesday as search and rescue operations in the Bering Sea were plagued by poor weather.

Of 60 crewmen aboard the 1,753-ton deep-sea fishing vessel, eight were rescued after it sank off the eastern coast of Russia Monday afternoon.

But one Korean crewman died from hypothermia shortly after being rescued.

According to a Korean Foreign Ministry official Tuesday, high waves and low temperatures made “search and rescue operations difficult.”

Overnight rescue operations for the Sajo Industries ship were halted for around several hours before resuming in the morning. No additional crewmen were found.

“According to experts, a person can survive in water temperatures of 10 to 15 degrees [Celsius] for approximately three hours,” the official added, “and it’s past that period.”

The aged vessel was fishing for pollack off the coast of Russia’s Kamchatka Peninsula on Monday afternoon. As the crew hauled in their catch and began to store it, the ship began to tilt and filled up with too much seawater, according to Sajo Industries.

The 60 people aboard the ship included 11 Koreans, 35 Indonesians, 13 Filipinos and one Russian inspector.

The surviving seven included three Indonesians, three Filipinos and one Russian, who were rescued by four Russian fishing vessels Monday.

Seoul officials cautioned that it was too early to give up hope because the trawler had been equipped with four life boats that could carry up to 20 people each and four more life boats with a capacity of 16 each. But four of the eight boats have been found empty.

The Foreign Ministry official added, “These are seasoned seamen, and there is hope that they were wearing insulated gear and are aboard life boats, so we will try our best to find them.”

The U.S. coast guard also flew in aircraft to assist in the rescue operations. Additional rescue vessels from Russia and Sajo Industries were on their way, but were delayed because of poor weather conditions. The Korean Ministry of Foreign Affairs dispatched two envoys from its consulate in Vladivostok on Monday to the Kamchatka coast to support rescue efforts and will send additional officials to Russia.

Prime Minister Chung Hong-won presided over a cabinet meeting in Seoul and ordered the Foreign Ministry, Oceans and Fisheries Ministries and other related government branches to maintain a “round-the-clock system” to deal with the accident and ordered “close cooperation with Russia, the U.S. and other nearby nations” for rescue efforts.

Im Chae-ok, an executive director at Sajo Industries, said the company held a briefing on the situation on Tuesday morning in its Busan branch office.

“Strong winds at 25 meters per second and waves as high as seven meters made it difficult for boats to even change directions,” hindering operations of Russian patrol boats and U.S. rescue helicopters, he said, explaining delays in the rescue operations.

But families of the missing Korean crewmen demanded answers from the fishing company about the search and rescue operations and questioned safety procedures.

The families purported that at least four hours passed from when the boat began to list until it sank.

They questioned whether crewmen were instructed to evacuate the ship, if the crew were wearing life jackets and if there were enough lifeboats.

They also criticized the company for buying a vessel built 36 years ago, claiming “other countries do not even allow such old vessels to be deployed.”