Foreign reserves shrink for 4th month in a row

Foreign reserves shrink for 4th month in a row 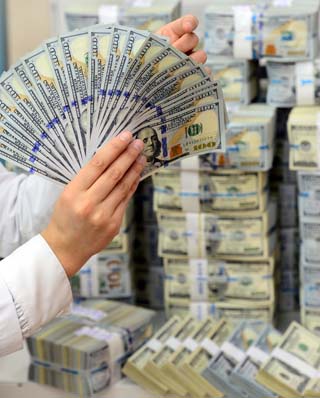 A dealer at the Korea Exchange Bank in Seoul counts U.S. dollars on Wednesday. The Bank of Korea said that Korea’s foreign reserves shrank for four straight months, the longest period since 2008. Korea had 363 billion dollars in foreign reserves at the end of November, down 630 million dollars from the previous month. [NEWSIS]

Korea’s foreign reserves, a symbol of strong economic fundamentals, have shrunk for the longest period since the global financial crisis of 2008.

Although the reserves remain above $360 billion, which many consider an appropriate level in case of emergency, the shrinking of the financial safety net amid a decelerating economy and lackluster exports is becoming a concern.

According to the Bank of Korea Wednesday, foreign reserves as of November stood at $363.1 billion. This was $630 million less than the previous month and the fourth consecutive month of shrinkage.

Up until July, the foreign reserves broke a new monthly record for 13 consecutive months. 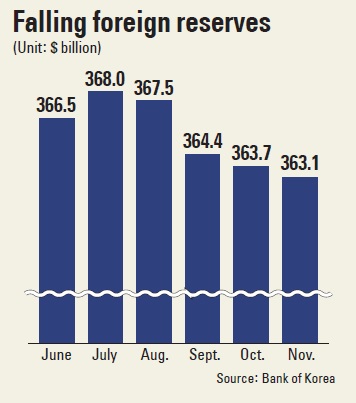 But after marking an all-time record of $368 billion in July, the reserves have been on a downward trend since August.

The last time the country’s foreign reserves shrank for this long was in 2008 when they fell for eight consecutive months between April and November.

The biggest cause of the shrinking foreign reserves has been the appreciation of the U.S. dollar against many major currencies including the Japanese yen and euro.

Among foreign currencies, Japan’s yen saw the sharpest depreciation against the greenback. As the Bank of Japan decided to push additional liquidity into the market in October, the yen fell further. Last month alone, the yen weakened 7.3 percent against the U.S. dollar. The euro and the pound depreciated 1.2 percent and 1.7 percent while the Australian dollar plummeted 3.4 percent.

Korea’s foreign reserves of more than $360 billion were considered a strong safety net against uncertain foreign financial markets. After the U.S. Federal Reserve ended its quantitative easing policy in October, Finance Minister Choi Kyung-hwan stressed that the possibility of disruption in the nation’s financial market by an exodus of foreign investments was low because of Korea’s abundant foreign reserves and its current account surplus.

Now the reserves are smaller and are likely to shrink again this month. One cause could be this week’s revision of Japan’s credit ratings by Moody’s rating agency. On Monday, the agency cut Japan’s credit rating down one level to A1, which puts the world’s third-biggest economy on par with Bermuda, Israel and Oman.

The lowered rating is expected to deepen the depreciation of the yen. In fact, the Japanese yen on Monday saw its value drop to its lowest level in seven years.

Although the nation’s current account balance has been in surplus for the longest streak in recent years, the quality has been suffering especially because exports have been falling as a result of a weak global market.

Such changed circumstances have made some question whether the Korean economy can reach the revised 3.5 percent growth target set by the BOK for this year.

As of October, Korea had the seventh-largest foreign reserve holdings in the world.