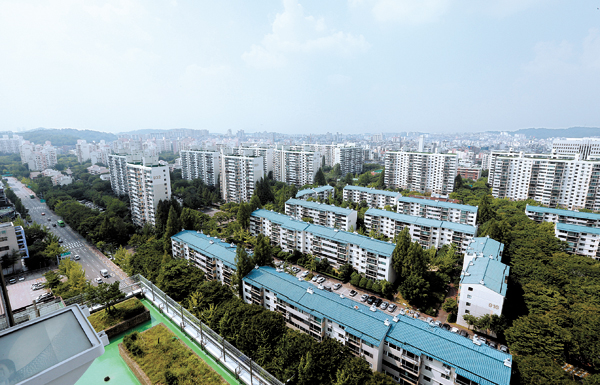 An apartment complex in Mokdong, western Seoul, that is waiting to be remodeled. [JoongAng Ilbo]

Due to the belated passage of eased regulations on reconstruction of old apartments and other legislation, expectations that the housing market would recover are being pared down.

After the government announced a package of measures on Sept. 1 to ease reconstruction regulations, the market reacted immediately. Inquiries about buying old apartments eligible for reconstruction surged.

In Jamsil, southeastern Seoul, real estate agencies are almost empty these days. About 4,000 apartments in the neighborhood’s Jugong 5 complex are awaiting approval for reconstruction. Owners of the apartments formed a union last December to push for the project. There are as many as 38 real estate agencies in the area, but it is hard to clinch a single deal. 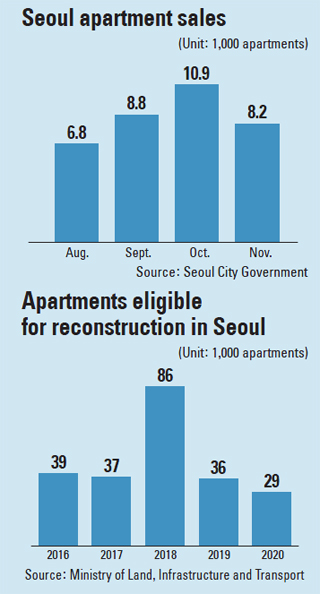 In November, there were only three contracts for apartments. But in September, 19 contracts were made. At the time, a 76-square-meter (818-square-foot) apartment was sold for 1.16 billion won ($1 million). The same house is now priced at 1.08 billion won.

“Because of the belated loosening of the regulations, potential buyers are not budging at the moment,” said Park Joon, president of a real estate agency in Jamsil.

Housing-related bills pending at the National Assembly are holding back consumers from trading houses. As a result, sale prices are going down.

The pending bills include raising the cap on prices of newly built apartments and eliminating taxation on gains from reconstructed apartments.

In Gaepo-dong, southern Seoul, there were only five transactions of apartments to be reconstructed made in November, compared to 50 in September. In Daechi-dong, next to Gaepo-dong, there was none.

“The effects of the government’s plan have disappeared in just a few months,” said Jeon Young-jun, a realtor in Gaepo-dong. “Even though prices dropped, there seems to be no signs of buying.”

Realtors say consumers feel uneasy about the cost of buying apartments that are subject to reconstruction.

If elimination of the 50 percent levy on the increase in a reconstructed apartment price is not approved by lawmakers by Tuesday, it will be reinstated next year.

The effect of the burden payment is significant in southern Seoul areas - Seocho District, Gangnam District and Songpa District. The burdens for increased prices of renewed apartments in these areas could be tens of millions of won, realtors say.

Due to the frozen reconstruction market, the entire housing market has been hard hit.

According to Seoul City Government, the number of apartment sales stood at 8,523 in November, down about 22 percent from the previous month. In Gangnam District, the number of transactions plunged about 34 percent.

Apartment prices in Seoul stopped rising last week for the first time since August, according to Kookmin Bank.

“Disappointment in the reconstruction market is spreading into the entire market, holding back prices,” said Park Won-kap, a senior research fellow at Kookmin Bank.