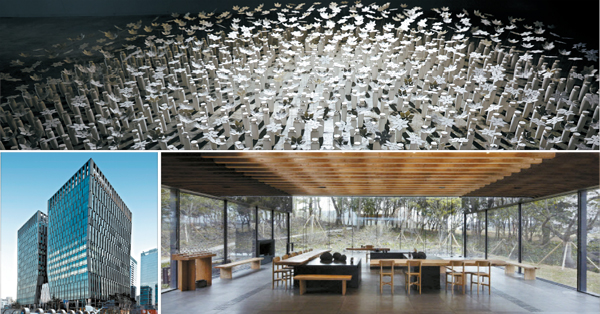 Top: Ceramic pieces shaped to look like maehwa, or Japanese apricot, in the ongoing Sulwha Cultural Exhibition “SKIN=NIKS.” The pieces were made by ceramic artist Kim Ha-yoon Provided by the exhibition. Above, left: AmorePacific’s company building in Jung District, central Seoul. Right: O’Sulloc Tea Stone, a tea experience venue in Jeju Island, which was built with an aim to revive tea culture in Korea. Provided by the company, [JoongAng Ilbo]

The value of traditional culture is often neglected by people in modern society. When every segment of life competes for attention, it is easy to overlook the simpler and more serene beauty of the old arts.

Korea’s leading cosmetics company, AmorePacific, has been trying to change that notion in the past few years through cultural patronage, especially in relation to local traditions.

Sulwhasoo, the company’s representative medicinal herb cosmetic brand, has been running the annual “Sulwhasoo Cultural Exhibition,” which has a reputation for merging the old with the new in a sophisticated way.

“Harmony of the old and the new aesthetics” is what Suh Kyung-bae, the company’s CEO, has been emphasizing to define AmorePacific’s own “Asian Beauty.”

His belief is threaded through the company’s art and culture sponsorship. AmorePacific has shown persistency in reviving Korea’s tea culture, which has faded away, replaced by take-out coffee. Starting from building its own green tea farm, the company’s tea brand O’Sulloc is continuing with its cultural patronage.


Imbuing the old with the new

A gallery dedicated to Sulwhasoo sits in the stylish neighborhood of Sinsa-dong near Dosan Park where a cluster of luxury brand flagship stores and fine dining restaurants are located.

An installation made from empty lotion bottles hangs from the ceiling at the entrance of the building. At a glance, it looks like a massive batch of clouds flowing overhead, but from a different perspective it resembles dancheong, or traditional Korean multicolored roof tiles. It makes a tinkling sound when touched, like wind chimes, which are often found in hanok, or old Korean houses.

“It can be interpreted in any way depending on the visitors’ perceptions, but we implemented the beauty of curves from our past times in every part of our artwork,” explained Josephin Suh, the manager of the exhibition’s PR team.

Tradition has been more noticeably adapted into the pieces on the three floors above. Materials that resemble hanji, or traditional Korean paper, and apricot flowers are used in much of the ceramic art. The shape of the flowers is one of the Four Gracious Plants, a set of widely used symbols in old Asian paintings.

“SKIN=NIKS,” the current show, is the eighth installment of Sulwhasoo’s annual cultural exhibition, which runs through Dec. 31 at Sulwhasoo Gallery, a venue the company purchased this year.

Five teams, including ceramist Kim Ha-yoon and visual artist Visualozik, participated in the yearlong planning process for the exhibition.

Admission is free and the participating artists are entirely sponsored by the company.

Visitors might find themselves opening their wallets to purchase souvenirs made by the participating artists, however. The profits are donated to nonprofit cultural organizations that support traditional Korean culture. 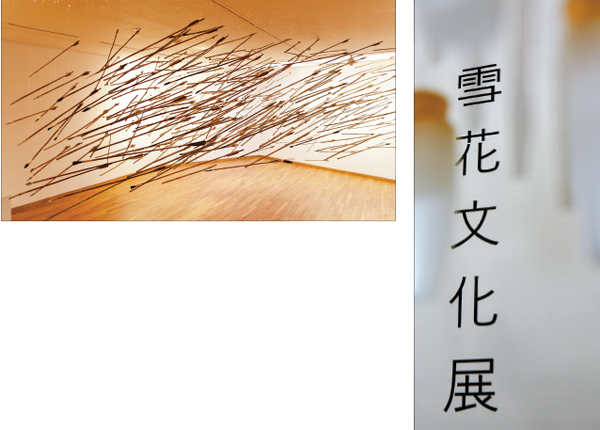 Left: An art piece from last year’s Sulwha Cultural Exhibition titled “The Power of Arrows across Eras.” Bows and arrows, which are cultural properties that are distinctive to many Asian countries, were artistically interpreted. [JoongAng Ilbo] Rigrt: Sulwha Cultural Exhibition is an annual show sponsored by AmorePacific to introduce traditional Korean culture to contemporary viewers. Provided by the exhibition

The root of AmorePacific’s art sponsorship goes back to 2003 when Sulwhasoo began to promote the cultural gathering “Sulwha Club.”

Since 2006, certain members of the club have arranged an annual event called “Night of Sulwha Culture” where artisans donated their work to be put up for auction. The money raised from the charity event has been donated to nonprofit cultural organizations that work to publicize Korea’s unknown cultural heritage.

“I expect the event of Night of Sulwha Culture to lay the foundation for Mecenat of Korean culture,” Suh said in 2006. “We will continue to give support to cultural artists, organizations of exhibitions and publishing cultural books to provide customers with hands-on experience and publicize the beauty of Korean culture.”

After “SKIN=NIKS” finishes in December, the cosmetics brand will start working on their next project.

“Sulwhasoo Cultural Exhibition will continue to play our part as a bridge in connecting our beautiful traditional culture to a wider range of generations. We will also continue to sponsor master artisans, which are the core value of our exhibition,” a representative of the show said.

AmorePacific is currently the world’s 17th-largest cosmetics company, according to an industry report released by Women’s Wear Daily, a U.S.-based fashion website, earlier this year.

In October, the beauty conglomerate unveiled a new production facility and a research center in China in an aim to be more active in Asian markets.

AmorePacific has also been persistently pushing its green tea business since 1979 by launching its own label, O’Sulloc.

The company was determined to jump into this market even though its prospects did not look too promising.

“The green tea business is what my father devoted his life in order to inherit the lost tea culture of Korea,” said Suh.

The company opened its own tea museum in 2001, the first of its kind in Korea, on Jeju Island.

Left: An installation titled “Stepping Stones” by young artist Jung So-young, which was part of this year’s APMAP. [JoongAng Ilbo] Right: “Thousand Years of Korean Tea Culture,” which was published by the company. Provided by the company

The museum has a display room that traces the development of tea sets in Korea’s history as well as tea utensils from Western countries.

More than 700,000 visitors come by the venue annually.

Living up to its reputation as Asia’s representative cosmetics company, AmorePacific has not forgotten to put an aesthetically pleasing touch on the venue. O’Sulloc Tea Stone, an additional facility where visitors can experience tea culture, was designed by internationally renowned architect Cho Min-suk. Even people who lack enthusiasm for tea culture are bound to want to stop by to enjoy the beauty of the venue.

As a part of sponsoring tea culture, Amore Pacific Foundation has also been publishing a series called “Thousand Years of Korean Tea Culture,” a compilation of tea-related historical records such as Samguk Sagi and the Annals of the Joseon Dynasty (1392-1910), with the help of literati from the domestic academic scene.

A company representative said that the profits from the six published books are being saved and will be donated to public services related to tea culture when the final edition rolls out.

Popularizing Korean traditions is undoubtedly a vital focus for AmorePacific’s cultural patronage, but it doesn’t mean that the company is excluding modern art and young artists from their realm of sponsorship.

Last year, the company launched an ambitious long-term program called Amore Pacific Museum of Art Project (APMAP), which provides an opportunity for young and rising artists to introduce their pieces to the public and receive financial help.

The latest installment, titled “Between Waves,” wrapped up in August on Jeju Island’s Seogwang Dawon, a tea garden near O’Sulloc’s Tea Museum.

Modern art is the focus of APMAP, but the pieces on display take various shapes and sizes. They can be spotted sporadically around the green tea farm, and even inside the museum.

APMAP has set out rough plans for its exhibitions for the next two years. They will be held in Yongin, Gyeonggi, where the company’s research center is located, and in Seoul at the construction site of AmorePacific’s new company building in Yongsan District, central Seoul, which it aims to complete in 2017.

“APMAP plans to tour the country and showcases experimental exhibits, which will help us unearth young artists who have the potential to grow big in the future and support them,” said the company in a press release.